100th Anniversary of the Execution of Joe Hill

Activist Joe Hill was executed by a firing squad one hundred years ago. He is immortalised in that famous song, writes Jim Sheridan 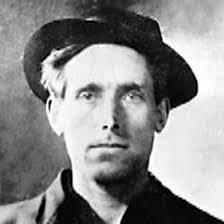 The Labour Movement never forgets its heroes. A statue of Big Jim Larkin stands in Dublin’s O’Connell St. to commemorate his support for the Dublin workers in the 1913 lock-out. He is the only 20th century figure to be so honoured.

The Industrial Workers of the World, IWW, or Wobblies as they were sometimes called, was a trade union that organised workers in the United States in the early 1900s.
Joe Hill, a Swedish emigrant born in 1879 became its troubadour and an activist. He was working on the docks in San Pedro, California in 1911 when the railroad workers, led by the IWW, were on strike.

The Railroad employed scab labour to run the trains and Joe wrote a song ‘Casey Jones the union scab’ which became a rallying anthem for the strikers. He said, “A pamphlet, no matter how good, is never read more than once, but a song is learned by heart and repeated over and over; and I maintain that if a person can put a few cold, common sense facts into a song, and dress them up in a cloak of humour, to take the dryness out of them, he will succeed in reaching a great many workers who will not read a pamphlet or an editorial on economic science.” Joe Hill gave an expression to the English language when he wrote his song ‘The Preacher and the Slave’, a parody on the Salvation Army hymn ‘In the Sweet Bye and Bye’. His version referred to heaven as ‘pie in the sky’.  Its chorus was as follows: ‘You will eat, bye and bye,
In that glorious land above the sky;
Work and pray, live on hay,
You’ll get pie in the sky when you die.’

Hill was charged with the murder of a shopkeeper in Salt Lake City in 1914. There was a lot of circumstantial evidence presented.
The ‘beyond a shadow of a doubt test’ was disputed and the trial was considered very unsatisfactory.

Nonetheless, he was found guilty and executed by a firing squad on November 19th 1915, in Salt Lake City. Many believed he was framed because he was a thorn in the side of the mine owners and other employers. Figures from President Wilson to Helen Keller entered pleas opposing his execution.

As he signed off on the procedure that November morning the Governor of Utah is reported to have said, “Some men are more dangerous dead than alive, and I’m afraid this guy is one of them.”

Joe Hill was a mixture of artist and activist. Mystique is a special ingredient in the making of a legend and martyrdom cements the mystique like nothing else can. His courage in facing the firing squad added to his reputation.

Joe is commemorated in the song ‘Joe Hill’ which was written some years after his death and has continued to surface at various times since then. The song was sung in the Civil War in Spain by the Abraham Lincoln Battalion of the International Brigade. It was recorded by Paul Robeson, the multi-talented African American singer, athlete and civil rights activist of the 1940s and 1950s. It surfaced again during the anti-Vietnam War struggle in the 1960s and 1970s sung by Joan Baez and Luke Kelly with the Dubliners.
The final verse of the song reaches out to workers on the picket line.
‘From San Diego Up to Maine
In every mine and mill
Where workers strike and organise
It’s there you’ll find Joe Hill
It’s there you’ll find Joe Hill’.
A poem of the era called ‘Joe Hill Listens to the Praying’ captures the rhythm and themes of that time. It tells about men travelling all over the country by jumping on freight trains, often covering long distances; sometimes they’d ride the rods under the carriages; that was very hazardous but men did it to get to somewhere they could get work.
They lived around ‘Jungle Camps’ which were ad hoc camps usually close to rail stations.
They were called hobos but these men did this to survive in a time that was not sympathetic to them, economically or otherwise.

It was estimated that in the years 1901 to 1903, 25,000 so called ‘trespassers’ were killed on America’s railroads and as many again were crippled or injured. The IWW produced a little ‘red book’ of songs, mostly written by Joe Hill, which were sung on picket lines right across the country and in bunk houses from Washington State to Maine. The hobos took them with them on their journeys across the continent. Joe Hill’s belief in the power of songs to reach people was borne out.

Jim Larkin was in Montana in the autumn of 1915 in support of striking miners, and made his way to Chicago for the funeral of Joe Hill. He was deeply affected by the execution and wrote in the International Socialist Review under the title ‘Murder Most Foul’.
“They shot him to death because he was a rebel, one of the disinherited, because he was the voice of the inarticulate downtrodden.”

Hill’s funeral in Chicago was a rallying point for Socialists. Larkin addressed a huge crowd of mourners and thundered, “Joe Hill’s last words were ‘don’t mourn for me: organise’.  The IWW movement has been sealed in the sweet blood of the poet radical. His callous, cold-blooded murder will do more to solidify the sentiment of the workers of the world than any other crime of the master class.”

Joe Hill’s remains was cremated and his ashes were cast to the wind, as was his wish.