150th Anniversary of the birth of James Connolly

James Connolly, a leader of the 1916 Easter Rising, was born on 5 June, 1868, to Irish parents in Edinburgh’s Cowgate, an area then known as ‘Little Ireland’. Pauline Murphy marks the sesquicentennial of his birth by looking at two songs associated with the executed leader.

June 5th marked the 150th anniversary of the birth of James Connolly, the Scottish Socialist who died for Ireland’s freedom in 1916. He was born at 107 Cowgate, Edinburgh, the son of Monaghan natives John Connolly and Mary McGinn. 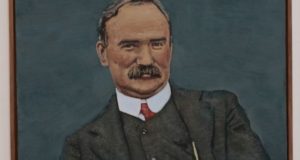 Cowgate was known locally as ‘Little Ireland’ due to the mass population of Irish immigrants in what was a slum area of Edinburgh’s old town. Connolly was born a bright summer’s day in 1868 into the dark slums where unemployment was high and illiteracy was rife but, the Connollys were different from other families as both parents had jobs and all in the family could read and write.

Connollys mother was a domestic servant and his father worked as a manure carter for the Edinburgh corporation. One of his brothers joined the British army, while his other brother worked in the Edinburgh Evening Post.

The Connolly family enjoyed employment but they, like the many other Irish immigrants in Edinburgh, suffered from hardships.

A hostile anti-Irish sentiment tainted society while the over-crowded slums resulted in health issues. Connollys mother suffered greatly from bronchitis and, at the age of 58, she succumbed to it.

As a young child growing up in the Irish ghetto Connolly developed rickets and in later life Sean O’Casey remarked how the trade union leader sported “a rather awkward carriage….with bow legs which gave a saddle to his walk.”