ROBINSON CRUSOE – A hard man to work for – everything had to be done by Friday!

When a great writer discovers a great story the result is often – but not always – a great book. This year marks the 300th anniversary of the publication of one of the finest novels of all time – The Life and Strange Surprising Adventures of Robinson Crusoe of Tork, Mariner.

The story tells how the main character – and for much of the book, the only character – was marooned on an island for twenty-eight years, miles from normal sea routes and with little chance of rescue.
The island would now feature in holiday brochures as ‘the truly get-away-from-it-all experience’, but Crusoe had no four-star hotel to rest in, no Michelin-rated restaurant to dine in, and no cocktail bar to unwind in. He had just his wits to help him survive.

Bear Grylls would have loved it.

The moral of the tale is man’s adaptability. Necessity, they say, is the mother of invention and we soon learn new skills when pushed to it. The body hardens up, we get fitter, and the debilitating lifestyle of pampered civilisation is replaced by healthy self-sufficiency.
Not all of Crusoe’s social conditioning is forgotten, however. The novel is a product of the time in which it was published (on 25 April, 1719, to be exact) and there is one major sticking point for most modern readers. 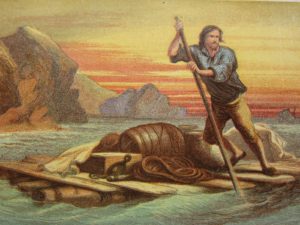 After many years of isolation, Crusoe finds fresh footprints on his usually pristine beach. This leads to his discovery of a young black sailor being chased by erstwhile shipmates with murderous intent. Crusoe saves the fugitive, but his Caucasian-centric way of looking at things does not allow him to believe that he now shares his home with an equal.

His new companion is not a new-found friend; he is a servant, whom Crusoe names ‘Friday’, and at the risk of being flippant, Robinson Crusoe could now enjoy his weekends off as he made sure that, from now on, all work would be done by Friday.

The author was Daniel Foe, born in London around 1660, the son of a prosperous tallow maker. He added the ‘De’ prefix later as it sounded aristocratic. His own life story reads like a novel. He survived plague and the Great Fire of London, and narrowly escaped the attention of Hanging Judge Jeffries after he’d chosen the losing side in the Monmouth Rebellion.

He went on to spy for William of Orange, as well as managing to beat bankruptcy by a judicial marriage.
It was as a writer that he came to fame. He supposedly wrote 547 titles, but the true figure is probably half that and most of these were short political and religious pamphlets and poems. Still, it’s an impressive canon.