A chat with Dervla Kirwan

Dublin’s Dervla Kirwan has been lighting up our TV screens on Sunday nights in the smash hit series Smother, and the former Ballykissangel star chats to Eugene Masterson about life, love, and her stellar acting career.

BACK in the 1990s Irish and British TV viewers fell in love with Dervla Kirwan when her feisty character Assumpta Kirwan and her doomed relationship with Father Clifford in Wicklow-set Ballykissangel became a mainstay of Sunday evening viewing, with almost 16 million viewers tuning in when the show was at its peak.

Nearly a quarter of a century later, Dubliner Dervla has been taking centre stage again on Sunday nights, starring in RTÉ’s Smother, as matriarch Val Ahern, a mum-of-three daughters estranged from her millionaire husband, Denis, who ended up murdered.

Dervla, who grew up in Churchtown, in Dublin, and now lives in Hampshire in England, started shooting the first series of Smother in February of 2020, just before lockdown began and had to spend three months in beautiful Co. Clare amid restrictions, as the world was turned upside down for both her and everyone else. 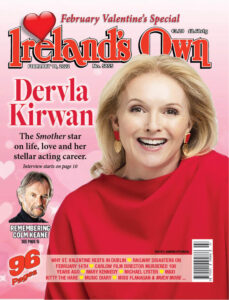 “I had never been to that part of Ireland,” she recalls. “When we arrived, we were shooting in February and it was like shooting in a tumble drier – the storms were coming in night after night, proper climate change, battering the coast and where we were filming.

“There was one day when we were standing outside and a very robust cameraperson was trying to hold the lights and they were just blown down Lahinch main street. I remember thinking ‘how am I going to do this for 12 weeks?’ But I loved it. I hope that this show will encourage people to visit the Wild Atlantic Way.”
She had to spent much of early last year isolated from her husband, English actor Rupert Penry-Jones, and their two children, Florence (17) and Peter (15).

“I had gone from extreme family to nothing, to literally being in a little apartment on my own, in the middle of nowhere, in west Clare, Lahinch, which is great, but it was a bit of a shock,” she recollects.

“Then of course there was no nightlife, no restaurants, no bars, no hanging out, no camaraderie, as you couldn’t. Everyone was in a bubble. Everyone was very, very caring and nurturing about that – we were very observant about the rules, it was very grown up. Everyone was in it together.”

When she returned to Co. Clare last year to shoot the second series, things were a bit better. The series was filmed around Lahinch and Dervla chortles when it’s pointed out that, with a murder in the first series and more violence in the second batch, that the sleepy west of Ireland haven is turning out to be competition for Midsomer Murders.
“Lahinch – ‘welcome to Lahinch, inhabitants 2,299 … today’. Someone had a brilliant name, ‘Lahinch mob’, I thought that was brilliant.”