60 Years of the Irish Charts

Though not so important now, when the first Top Ten was broadcast on Radio Éireannin October 1962 the charts quickly became a subject of fascination for many people. Francis K. Beirne looks at some of the more notable songs and artists which made the grade over the next six decades.

Unlike today, when very few people have any idea what Ireland’s best-selling song is, back in the 60s, teenagers and twenties were glued to the radio to listen to the weekly countdown. It started at No. 10 and it would be up one place to No. 7 or down two places to No. 5 or occasionally, straight in at No. 1’.

The charts would be the topic of conversation in school yards, offices and every other workplace on Tuesday mornings. In our local cinema, Ireland’s Top Ten was played over the P.A. before the films began. 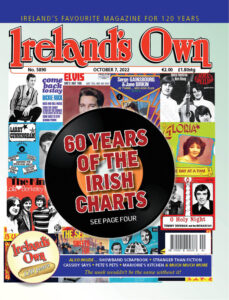 Though weekly listings of popular record sales were compiled in the USA since 1942 and in Great Britain from 1952, it was October 1962 before Irish sales were compiled and broadcast. On the evening of Monday 1st October 1962, 60 years ago this year, RTÉ Radio broadcast Ireland’s first Top Ten compiled by Jimmy Magee. Jimmy was succeeded by Larry Gogan, who presented Ireland’s Top Ten for decades. Harry Thullier, Michael Maguire and others hosted the show occasionally.

Evening Herald
The first effort to compile a list of best-selling records in Ireland happened prior to 1962, in September 1954 in fact, when the Evening Herald published “the top three best-sellers in Dublin”. This list continued for a few months but it changed in January 1955 when the three big record labels – EMI, Decca and Philips – muscled in and had their two best-selling singles published each fortnight. The Nixa (Pye) record label was allowed in with their top two singles in February 1956.

In February 1959, the four big record labels were pushed aside when the Evening Herald introduced the Herald Top Ten’, compiled from figures submitted by selected record shops. Numerical order was introduced and smaller labels had an equal chance. Until the first broadcast Top Ten in 1962, this was the only guide to best-selling singles.

Some of the pre-1962 chart-toppers were I Could Have Danced All Night (Julie Andrews), A Pub With No Beer (Slim Dusty), It Doesn’t Matter Anymore (Buddy Holly), Mack The Knife (Bobby Darin), High Hopes (Frank Sinatra), My Old Man’s A Dustman (Lonnie Donegan), Apache (The Shadows), Hello Mary Lou (Ricky Nelson), Stranger On The Shore (Mr. Acker Bilk) and the last one prior to the first broadcast, I Remember You (Frank Ifield). An Elvis Presley record, She’s Not You was the first broadcast Irish No. 1.