‘Unequalled in Ireland for wild and rude magnificence.’
These are the words of Victorian travellers Mr and Mrs Samuel Carter Hall when they visited Donegal in 1840. Many people still regard County Donegal as an unequalled destination to visit in Ireland.  It has so much to offer in terms of its aesthetic delights and hospitality of its people, writes Cathal Coyle.

There is another name associated with Donegal – Tír Chonaill, meaning Conall’s land or territory. This name historically only referred to the west of the county, excluding  Inishowen and other areas. This was derived from Conall, claimed by some historians to be the son of fifth century monarch Niall Noigiallach, or Niall of the Nine Hostages.

The O’Donnell clan held a considerable influence in Donegal from the eleventh to the seventeenth century. The first O’Donnell chieftain was Eighneachan, inaugurated in 1200, the first of an unbroken line of twenty-five chieftains; the last was Niall Garbh, who was inaugurated as the last chieftain of the O’Donnells in 1603 and died in 1625. 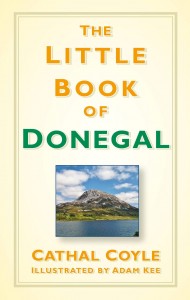 Indeed, Donegal’s general contribution to Irish history, politics and culture (among many other themes) is considerable. Sports stars such as Packie Bonner from Burtonport, literary legends such as Frank McGuinness from Buncrana and musical maestros such as Enya Brennan from Crolly are just a few of the talented individuals to hail from Donegal in recent decades.

But what about the place itself? The ‘Wild Atlantic Way’ initiative has provided focus to those amazing beaches that are among the finest in Europe. Towns such as Ballyshannon and Raphoe have a proud architectural heritage while the castles and landmarks such as the Grianán of Aileach symbolise a link to ancient times that has been maintained.

County Donegal is the designated northern starting point – and this road trip traces the coastline from Malin Head on the Inishowen Peninsula – mainland Ireland’s most northerly point – to the seaside town of Kinsale in County Cork.