6th December, 1921 – the signing of the Anglo-Irish Treaty

As the people of Ireland looked forward to the new year of 1922 the situation in the country had changed dramatically with the signing in early December of the Anglo-Irish treaty and the prospect of a future without conflict seemed a real possibility, writes Eamonn Duggan.

When the people of Ireland gathered in their homes and participated in the Christmas festivities at the end of 1921 they would have been forgiven if they all felt a sense of bewilderment at the turn of events across the country during the previous twelve months.

Back in January, they – and the country in general – were still engulfed in the struggle for independence which had been raging since January 1919. Every day there were reports of ambushes being carried out by IRA active service units and flying columns against the forces of the Crown. They also had to contend with acts of reprisals perpetrated, often against the civilian population, by the Black and Tans, the RIC and the British military. 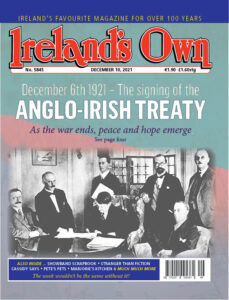 There was little to indicate that the situation across the country was going to change at any time in the future and, indeed, many people had accepted in their own minds that the disruption to normal life and the suffering was set to continue. Yet, as they looked forward to the new year of 1922 the situation in the country had changed dramatically and the prospect of a future without conflict seemed a real possibility.

As people sat around their firesides during that festive season, they may well have recalled the early months of the year when, almost every day, attacks and ambushes made up the greater part of the news. Many would have been aware during those early months of 1921 of the existence of IRA flying columns and active service units operating in their localities. They would have heard the sounds of gunshots and mines exploding and most likely have witnessed the movements of Volunteers across the countryside.

Many a household probably recalled how it provided food and refuge to the IRA men during those tumultuous months. Indeed, I have no doubt that a large number of those who reminisced at the back end of 1921 were probably still mourning family members, friends and neighbours who had lost their lives in the conflict, be it in those early months of the year or even earlier in the independence conflict.

So, as they all looked into the flames of their blazing firesides, they must surely have felt a mix of emotions: sadness for those who had lost their lives and relief that the fighting was over and that the politicians were about to vote on an agreement designed to bring peace and a new era in their country’s history.

Early in the year that prospect of an agreement between both sides looked remote as fighting continued, with the IRA targeting RIC barracks and military patrols. The violence seemed to be accelerating, bringing about casualties on both sides. The fighting had extended to many parts of the country and the conflict had attracted world wide attention. In Britain, public opinion had begun to turn against the conflict and it was becoming increasingly difficult for politicians to justify its continuation.