Ellis Island is located in the upper bay just off the New Jersey coast, not far from the Statue of Liberty. It is named after Samuel Ellis, who became the island’s private owner in the 1770s. Whilst its immigration centre ceased to be operational decades ago; it remains an important symbol of America’s migration story – it was the gateway for over 12 million immigrants to the United States for over sixty years until 1954. 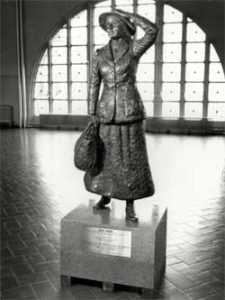 And when Ellis Island officially opened on January 1st, 1892, the first passenger processed through the immigration centre was an Irish girl named Annie Moore, from County Cork. The 15-year-old (she celebrated her birthday on New Year’s Day) had travelled with her two younger brothers, Anthony and Philip, on the S.S. Nevada, having departed from Cobh on 21st December, 1891.

After passing through Ellis Island, Annie (who received a greeting from officials and a $10 gold piece to mark the occasion) and her brothers were reunited with their parents, who had arrived the year before. This historic event was officially documented in The New York Times the following day.

As for Annie’s life in America, for many years the legend suggested that she ventured westwards and married a descendant of the Irish ‘Liberator’ Daniel O’Connell in Texas, before dying in 1919, the victim of a streetcar accident.