A Chat with Mike Murphy

Ask any Irish TV viewer of a certain vintage, and they will undoubtedly have a favourite ‘Mike Murphy’ moment. The self-deprecating Dubliner with the contagious smile has an effortless ability to light up rooms, and faces, and has enjoyed a glittering career in broadcasting.

His screen legacy is a mixture of culture, comedy, groundbreaking documentaries, game shows, light entertainment, insightful interviews and running parallel, a radio career that includes his twelve-years at the helm of RTE radio’s ‘Arts Show’ series. Those famous airwaves where his unchartered career began over 50 years ago.

On a fresh winter’s morning, Mike is in chipper form as he returns home from a leisurely walk along the capital’s pathways, and that instantly recognisable voice is more than happy to take Ireland’s Own readers for a trip down Memory Lane. 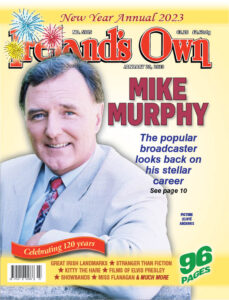 Born in Dublin, in 1941, Michael Murphy was the eldest of five children, reared in a loving family where his father worked long hours to make ends meet, and his mother was everything those lively little people needed at home.

“My father was in the motor business, and had a garage in Harold’s Cross beside the greyhound track,” he recalls, “and for some reason he kept moving house. We stayed more or less in the same schools when we were young, but by the time I was fourteen we had moved fourteen times, yet all around the same area, Ranelagh, Rathmines, Donnybrook, Rathgar, Harold’s Cross and Terenure.

“I don’t know why he moved because every time we moved, he lost money. It was very confusing going into school each year and saying we had moved to a new address – I’m sure they were wondering in Terenure College were the tax inspectors were after my father. I don’t think they were…
“My mother had to give up her job in the Civil Service when she married him, and she was a stay-at-home mother, a terrific mother to all of us.

“I never had aspirations to be a broadcaster, ever. In fact, when I was in school my father regarded me as a ‘dope’. I failed most of my exams and he eventually took me out of school when I was finishing Fifth Year knowing I hadn’t a hope in hell of passing my Leaving. So I never did my Leaving, and he got me a job in the drapery business.

“I went into Crowe Wilson’s, and I became an apprentice draper, which I really enjoyed. But at the same time, when I was in Terenure College I was quite a good rugby player, and I featured in plays, many of them by Shakespeare.

“I didn’t have lead roles but I featured in MacBeth, and Hamlet, and the Merchant of Venice, and a couple of other things. Because I left school early, I joined the Dublin Shakespeare Society and did amateur drama. Then I left the drapery, and had no job, and my father considered me the greatest waster of all time, as he phrased it himself.

“I met Eileen, who became my first wife, and we wanted to get married, but I had no job, so I applied to RTE for the position of an announcer.

“I cheated, and said that I had got the Leaving Cert, assuming they would check it out, but they didn’t, and eventually after much trial and tribulations I was taken on as a part-time announcer in Radió Éireann, in Henry Street, and that’s really where my broadcasting career began.”