A Nostalgic Visit to Clifden Castle

Sometimes we visit the past by chance. That happened to me last year, when I discovered for myself how a place takes on an extra dimension when personal history is added. 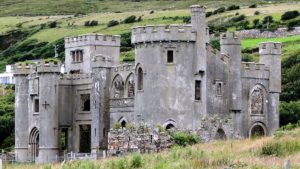 My mother came from Northern Ireland and met my father, a Lancashire man, during the Second World War, moving to England when they married in 1948. As a result, my childhood was punctuated with visits to ‘home’.

These faded away as I grew up, but I never forgot about them. So when my husband suggested we join a couple of friends on a coach holiday to Connemara, it seemed an ideal opportunity to make up for lost time, as well as getting to know a little of a beautiful area.

According to the itinerary, we would be based in Clifden, in County Galway. Although my mother didn’t hail from that part of Ireland, something about the name rang a bell. My parents both died some time ago, but I checked an old photograph album and, sure enough, one page was marked ‘Clifden, 1947’.

It contained five faded black and white photographs, two of them showing what appeared to be a ruined castle in a field. Intrigued, I took a photocopy, in case the place still existed and was within reach of where we were staying.

Our first full day in Clifden was free from excursions, for us to relax and explore. This would be the perfect chance. After breakfast, I showed the page to some of the waitresses and told them a little about how my parents had met.

“That’s Clifden Castle,” one of them said. “It’s in walking distance. Go up the Sky Road and you’ll soon find it.”

Continue reading in this week’s Ireland’s Own (issue 5605)