A Tribute to Jimmy Magee

A Tribute to Jimmy Magee 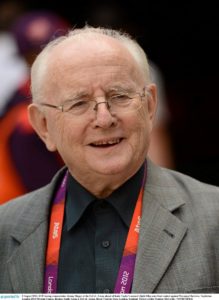 In 1994, I was a seventeen-year-old journalism student asked to interview someone famous as part a college project. New to how the journalism game worked, and also a sports nut, I rang the RTE receptionist to ask if I could speak to Jimmy Magee. “One moment, Sir,” the lady replied, and put me through to the sports desk. Jimmy cheerfully answered the phone, and I explained what I had been asked to do. “No problem at all, young man,” was his reply. There and then, he gave me a half-hour interview, and could not have been more courteous. He will be remembered as a gentleman, and commentating great. The following is an interview he did for Ireland’s Own in 2012.

A voice for the ages

In the summer of 2012, over one million viewers turned on their television sets to witness golden girl, Katie Taylor, punch her way to Olympic glory, at the ExCel Arena in London. For those nerve-wracking eighteen minutes that it took Bray’s first lady to see off her dogged Russian opponent, a familiar voice carried us through the twists and turns of the pulsating battle – the same voice that has now described the explosive action at eleven summer Olympics, and twelve World Cups.

Coming across loud and clearly over Irish airwaves for over half a century, Jimmy Magee has established himself as the country’s very own Memory Man, though he insists the title was bestowed upon him, and wasn’t self-appointed. The County Louth man has also become famous in sporting circles around the world, celebrated for the credence he gives to the Irish-associated expression of having the ‘gift of the gab’. When it comes to having the right words to suit any sports occasion, Jimmy Magee is your man.

Today, on a quiet Friday afternoon in late autumn, Jimmy has a touch of a cold which was brought on by the unpredictable weather we have been experiencing this year. Other than that he is in sparkling form, as he reflects on a life that up to now has been never short of excitement.

‘These days if people stop me on the street they want to congratulate me on the London Olympics and talk about Katie,’ he says, ‘or whatever sporting event is coming up that weekend. They like to hear my thoughts on who I think is going to win the All-Ireland final or who I think should be in the Irish soccer team. I don’t really follow any particular soccer team but I like seeing the game played properly, so I enjoy watching the likes of Barcelona and Real Madrid at the moment.’

Jimmy knew Katie Taylor had the potential to become an Olympic champion long ago. Back in March 2009, he remembers watching her wow an 02 Arena audience when she appeared on the same bill as Bernard Dunne. He cheered her on, affectionately, while she clocked up European and World titles and is proud to have been present when she made history by becoming the first Irish woman to win an Olympic medal for boxing in London. In his opinion, she is Ireland’s greatest contemporary sportsperson.

When his parents Patrick and Rose Magee packed their suitcases and took their not yet three-year-old son out of New York to start a new life across the Atlantic Sea, they had no idea that he would grow up to become one of Ireland’s best loved sports commentators. Jimmy was born in the Bronx in 1935, the eldest of four children but grew up in Ireland, enjoying an idyllic childhood in the Carlingford-Greenore area of rural Louth.

As a boy, he remembers trekking across the fields to visit his grandfather who lived on the side of a mountain and talking to himself, pretending that he was commentating on a GAA game that was taking part in Croke Park that weekend. He even sang some live music to accompany the report, as he also had aspirations to become a disc jockey. Inspired by such legendary commentators as Micheal O’Hehir, Stewart McPherson, John Arlott and Raymond Glendenning, who worked with the BBC, young Jimmy had one true goal in life – to be a sports commentator. It was a dream that he would never give up on.

‘The walks used to take me three-quarters of an hour,’ he recalls, ‘and I would have the whole thing timed to perfection. I was the imaginary presenter of Sunday Sport and I gave the news as if it was real, who was injured, the teams and all the action as it happened. When the call eventually came from RTE I was fully ready to go, because in my head I had done it all many times before.’

Tragedy struck when Jimmy was fifteen years old. His dad, who he idolised, passed away at the age of forty-three, from TB. Being the eldest, he felt it was up to him to become the man of the house and start earning some money to ease the pressure on his mother. Reluctantly, he sacrificed his education to serve his time as a pharmacist in Carlingford. He stayed there for two years before leaving for a job with British Railways, where the pay was better. After six months, he was transferred to Dublin where he managed to get his foot into Radio Eireann, and the realisation of his boyhood dream came true.

‘There was a guy working in RTE called Harry Thuillier who was one of their biggest stars at the time and he had a programme called Junior Sports Magazine. I pestered him a few times for an audition. Eventually he called me back and asked me to come in for a voice test. A few days later he called and said that he liked what he had heard and would I cover a game of hockey the following weekend. That was May 1956, and it was the best feeling in the world when he invited me to become a freelancer on the show.

‘I tried my hand at playing sports too. I played Gaelic football in school and even had aspirations to be a sprinter. The one hundred metre-event was my speciality and I thought I might have a chance of making one of the Olympic teams. I suffered a nasty injury when I was trying out for Dundalk football club at the age of sixteen, and that was the end of any professional sports ideas. I consoled myself with the fact that the career of a commentator outlives the career of sports stars by many years and sure the evidence stands conclusive – here I am in my seventy-seventh year and still doing what I love best.’

Jimmy met the love of his life, Marie Gallagher, at a dance in a ballroom beside the Gate Theatre in 1953. Married at the age of twenty, he feels his early foray into matrimony was the best thing that ever happened to him as it forced him to mature quickly, and also helped him to concentrate on his career. Together they had five children, two boys, Paul and Mark and three girls, Linda, June and Patricia. In 1989, Jimmy lost both his mother and Marie, his beloved wife departing this world far too soon, at the age of fifty-five. He says they would have been married for fifty eight years this year had she lived, and he openly admits feeling lonely at times since she has been gone. Work commitments and looking to the future have helped him cope with her loss, always thinking and planning for the next big sporting event. More tragedy lay in store when his son Paul succumbed to Motor Neuron Disease, a muscle wasting disease, in 2008.

‘Paul was a sports fanatic and he excelled at a number of sports including running, Gaelic Football and soccer – he played with Shamrock Rovers and won a League Cup and FAI Cup with them,’ says Jimmy. ‘He was also an international tenpin bowler. He had an extremely positive outlook on life. As strong as he was, however, it couldn’t save him.’

From covering the first all-London FA Cup Final between Tottenham and Chelsea in 1967 for RTE to watching Bayern Munich capture three European Championships in a row in 1976, or being at the golfing heaven that is the Augusta Masters, Jimmy has such a treasure chest of memories to draw from that it is pretty impossible for him to select one favourite, though Michael Carruth and Katie Taylor’s Olympic victories do get special mention.

In 1987, Jimmy and fellow RTE commentator George Hamilton teamed up to produce a TV sports quiz called Know Your Sport which ran for eleven years, striking a major chord with a mostly male audience around the country. For all the half hours women had commandeered the TV set to watch their favourite soap operas down through the years, suddenly their other halves had a reason to grip the remote control come seven o’clock on a Monday evening.

‘I suppose Know Your Sport was where the name Memory Man first started,’ says Jimmy, ‘and it was carried on from there. It was a brilliant show and I still remember the big winner at the end of the first series. He was a very knowledgeable Waterford man called Tony Hunt, who is an uncle of the footballers Stephen and Noel Hunt. He was our first champion and won a trip to Seoul in South Korea for the Olympic Games of 1988. A few months back myself and George got together and had a chat about resurrecting the show. I’d definitely be up for it – why not?’