A tribute to Joe Cuddy

Joe Cuddy, who died just before Christmas 2020, was a popular cabaret performer, but unusually for an Irish cabaret star, he didn’t come to the cabaret scene from a showband background.

His secondary education was in the Redemptorist College in Limerick. Also in college with Joe at that time were future band leader ‘Big Jim’ Farley, optician Donal McNally and Donal’s brother, the singer John McNally.
When Joe finished his secondary education he returned to Dublin and began working in his father’s butcher’s shop on the North Strand. 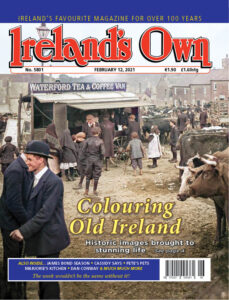 There was no history of showbiz in the family, but Joe was told that his mother Margaret, who died when he was only three years old, was a good singer. Joe sang with the Killester choir where he met his future wife Ann Reynolds. They had four daughters: Suzanne, Paula-Jane, Lynn and Joanne.

While working in his father’s butcher’s shop Joe often took time off to sing at various functions. Gradually he was getting enough work to hang up his butcher’s apron and go full-time as a singer on the cabaret circuit.
In 1971 Joe won the Folk/Ballad section at the Castlebar Song Contest with the Vic Dawton composition ‘Diana of the Roses.’ Two years later he was the overall winner in Castlebar with the Vince Hill/Ernie Dunstall composition ‘I’m Gonna Make It.’