Abbey of the Black Hag

Is this Ireland’s most haunted burial place, asks Mike Webster?

First mentioned in 1298, Saint Katherine’s Augustinian Abbey is considered to be one of the first and indeed one of the few medieval nunneries known in Ireland.
It was founded on land donated by one John FitzThomas of Connello who was born at Shanid Castle about 1195 and died in 1261.

Now just a ruin and well hidden, the abbey nestles in a small secluded valley around two miles south east of the village of Shanagolden in Limerick. 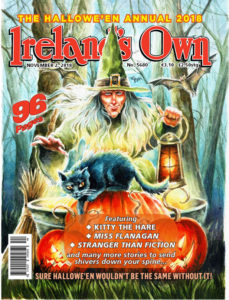 The remains comprise the abbey church situated to the east of the cloister and refectory to the south.

During the 15th century, some modifications resulted in the inclusion of an east window to the church and a doorway to the north.

Only the remains of the abbey church and refectory can now bear witness to a very disturbing past. It is a dark, depressing and brooding place that positively oozes a sinister influence. The ‘Black Hag’ still rules here for sure.

It was the last prioress of this Augustinian order that has gone down in history and being derided as ‘The Black Hag’, more than likely because of her black-faced appearance at around the time of her death. But it is also highly possible that the name was applied after she was found to be dabbling in witchcraft in a room to the south of the church now known as ‘The Black Hag’s Cell’.

She terrified all the local community and tales still remain of her mastery of the black arts and numerous depravities.

She was a member of the FitzGerald family who were tenants of the nearby Shanid Castle.