William Cosgrove was born to Michael and Mary Cosgrove on 1 October, 1888, one of six children, five boys and one girl.

Each of the children attended the Ballinrostig National School, at Aghada in County Cork.
Having worked for a little while with a Mr. Dohan of Whitegate, William enlisted in the 1st Battalion of the Royal Munster Fusiliers in 1910, where he was given the regimental number 8980. 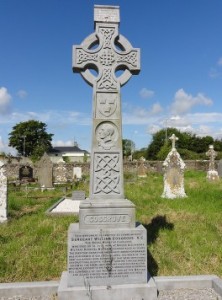 For the next four years, William would be stationed in Burma, until 21 November, 1914. Embarking for England on that date, William and his regiment stopped over in Calcutta, India, until 2 December 1914, finally arriving in England on Sunday, 10 January, 1915, in the company of 19 officers and 870 other ranks. William had now been promoted to the rank of Corporal.

Several months later in April, 1915, William and his regiment had joined the Royal Dublin Fusiliers and the Hampshire Regiment who were now part of the 29th Division (United Kingdom) they were now billeted on the converted collier ‘River Clyde’, on their way to the Dardanelles what is commonly known as Gallipoli.

on Sunday, 25 April, the day of the offensive, William and his comrades awoke to a day that was bright with a light mist. Moreover, the sea itself was like a mirror – smooth and motionless, which only added to the expectation of an easy victory.

By 5 a.m., the naval ships that accompanied the army began to bombard the Turkish forts. Following the bombardment, troops began to disembark from the River Clyde, in the belief that they could now attack the beaches.

The beaches were all given letters so everyone knew which beach they would be attacking. These were ‘S’, ‘V’, ‘W’, ‘X’ and ‘Y’.

The Munsters were given the task of attacking ‘V’ beach, however, instead of the easy victory they had previously expected, things had turned out very differently. Several reasons have been attributed to this change in fortune. 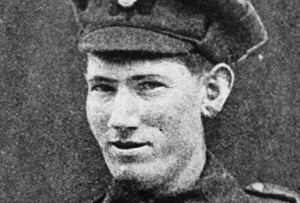 Not only had the Turkish forces not returned fire following the bombardment by the navy (which fooled many into the belief that there were no defenders), but waited until the troops had disembarked and then fired on those who were struggling to get ashore because of their heavy equipment. This led to some drowning, while others were shot before they reached the beaches. The following day, Monday, 26 April, would change William’s life forever. This is how the ‘London Gazette’, described the events that day…For the most conspicuous bravery of his section with great dash during the attack from the beach to the east of Cape Helles, on the Turkish positions, on April 26th, 1915. Corporal Cosgrove on this occasion pulled down the posts of the enemy’s high wire entanglements singled handed, notwithstanding a terrific fire from both front and flanks, there greatly contributing to the successful clearing of the heights.

Royal Navy Surgeon, P. Burrowes Kelly, R.N. D.S.O. recalled the actions of William in his diary:
An Irish giant, with his officers and brother Tommies dying and dead around him, continued a task he set himself of clearing a way through the Turkish wire.
Though under heavy fire, he continued at his task, and eventually aided by his exceptional strength, succeeded in wrenching a stanchion out of the ground. The others had failed to cut the wire.

The manner in which the man worked out in the open will never be forgotten by those who were fortunate enough to witness it.

Several months later, on 25 August, 1915, the Cork Examiner carried the following article on the events previously described. They also carried a picture of William receiving a “hearty congratulations” from Lieutenant-Colonel Brasier Creagh. Colonel Creagh also stated that “the highest rank in the service is open to such as you” (William).

In an interview for the newspaper, William explained how he and fifty others, led by Sergeant Major Dennett (who was killed during the action) ran some one hundred yards.
William also explained he did not know if he “ran or prayed the faster – I wanted to try and succeed in my work and I also wanted to have the benefit of dying with a prayer in my mind.”

During the action, William was hit in the side by a bullet which passed through him. However, the most interesting part of the interview relates to William’s own account of the events that day…

“Heavens,” said I,  “We’re done. A moment later I threw the pliers from me. ‘Pull them up’, I roared, ‘put your arms round them and pull them out of the ground.’ I dashed at the first one heaved and strained and then it came into my arms the swing as you’d lift a child. I could not tell you how many I pulled up. I did my best and the boys that were left with me were every bit as good as myself and I do wish that they all got some recognition. When the wire was down, the rest of the lads came out like ‘divils’ (sic) and not withstanding the pulverising fire, they reached the trenches. They met a brave, honourable foe in the Turks, and I am sorry that such decent fighting men were brought into the row by such dirty tricksters as the Germans.”

William was one of the lucky soldiers from his Division (the 29th Division). Others would not be so lucky. Over a period of 259 days (from 25 April, 1915, to late December, 1915, when it was decided that the offensive should be called off and an evacuation was declared), the number of casualties stood at 34,011. When one considers that that total strength of the division was 7, 300, the number of casualties was over four and half times its strength.

Indeed some of those who were casualties had be invalided out during operations and later returned, these included 18 officers and 1,405 other ranks. However, this is not quite the end of the story.

Another important statistic is the number of officers and men who were not invalided out and survived to see the evacuation. This stood at 14 officers and 1,523 other ranks.
It cannot be stated categorically if William had returned to the Dardanelles at this stage or not.

Several years later on Thursday, 15 February, 1923, His Majesty King George V would receive the colours of the Royal Munster Fusiliers. These were later laid up in the Tower of London, so ending William’s career with the battalion he joined in 1910.
A year earlier, in 1922, William had transferred to the Northumberland Fusiliers. From there he was posted to India with the rank of Staff Sergeant instructor, and served with Kolar Gold Fields Battalion Auxiliary Forces in India.

By 1934, William retired from the army, however, the wounds he had previously dismissed and the damage they inflicted – returned, leading to his death on 14 July, 1936. He was 46 years of age.

William would receive two more medals the first ‘the Meritorious Service Medal and the King George V Jubilee Medal’ (King George V celebrated his silver jubilee in 1935).
His body was returned to Cork on board the S.S. Innisfallen and later buried in family burial ground of Upper Aghada. At the graveside former soldiers of William’s regiment and villagers stood in silence as the Last Post was played. Among the wreaths one was from the Leinster Regiment Old Comrades Association which read. ‘In Loving Remembrance of a great Irish soldier’ In conclusion, William’s grave is a splendid Celtic cross with the following epitaph:

The deed that gained him the highest award for bravery was performed at Gallipoli. 26 April 1915. when he tore away barbed wire barricades that were impassable obstructions. Despite terrific gunfire concentrated on him by the enemy and thereby saved his batallion (sic) who were exposed to the fate of annihilation otherwise. His comrades of the Regiment and of the British and Allied forces remember him with everlasting gratitude.