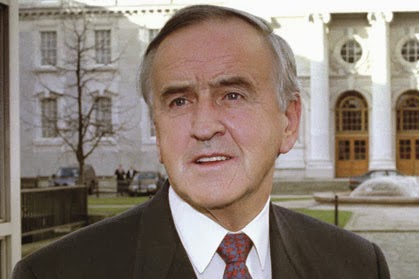 Albert Reynolds did not enter political life until he was forty- four years of age, and he served as Taoiseach for less than three years.

But he made an impact on Irish politics that that belies his relatively short political career, and that few other Irish political figures have equalled since the foundation of the State.

And yet, while he was achieving great things in every ministerial position he held as part of government, and even while he worked so hard behind the scenes as leader of the country, there were those who looked down upon him from their dizzy intellectual heights, not fully able to comprehend how a man who liked, even loved, country music, could even aspire to the highest office in the land. I heard a man say that Albert Reynolds was the best Taoiseach Ireland ever had, bar none, and the man standing next to him replied “You might be right,” in that curiously Irish way of nearly agreeing with someone, or not quite disagreeing. I think he might be right. I’m almost sure he is. For I can think of no other Taoiseach who achieved so much in so short a term in office, and indeed in a relatively short political career.

That said, though, each and every leader performs to uniquely meet the needs of the time in which he serves.

They each have their day; and each leader has a unique socio-political climate in which to make a good and positive impact upon the country. I heard the names W. T. Cosgrave, Sean Lemass, Garrett Fitzgerald, and Charles Haughey punctuate conversations going on around me. There were others too, but these are the names I recall most readily. And among them, in that Irish pantheon, the name Albert Reynolds rings clear.

The late Albert was, I guess, the quintesssential man of the people. He was an astute businessman, the owner of a successful pet food company, and a dance-hall entrepeneur. He gave the impression that he always, or nearly always, had a song in his heart, and a Country & Western song at that.

He was an honest man, and perhaps that and an inherent decency, coupled with political nous, enabled him to play such a significant role in the Peace Process. I was very pleased to see the former British Prime Minister, John Major, at the funeral Mass.

There were, of course, many friends and admirers and contemporaries in the crowded pews as well, but to me, the presence of Mr. Major was perhaps most significant of all the visiting dignitaries to pay their last respects. The Holy Father, Pope Francis, paid a fulsome tribute which was read at the funeral service. In his letter from Rome, Pope Francis wrote that he’d learned with sadness of the death of Albert Reynolds, expressed gratitude for his efforts to promote peace and reconciliation in Ireland, and prayed for the eternal repose of his soul.

Once, the late great American country star, Johnny Cash, was about to perform at an Irish venue. It was 1963, I think. Albert, who owned the premises, came in and told the manager to cancel the concert, as he had just received news of the death of Pope John XXIII. It is very unlikely that this would happen today. I can’t imagine a Garth Brooks show being cancelled for a similar reason, such are the ways of modern, ‘secular’ Ireland. Yet, the honour and respect shown to the late Albert Reynolds, the splendour of his send-off, the solemn funeral ceremony in the sacred Heart Church, in Donnybrook, belies such thoughts and bespeaks a Catholicism and a religiosity that is still vibrantly at the heart of this nation.

The memory of Mr. Reynolds and his achievements will long reside in the heart of the nation, and in pages of modern Irish history.