Alcatraz – A Rock and a Hard Place

Situated on the island of Alcatraz in California’s San Francisco Bay, stands America’s former maximum security prison, often referred to by its inmates as ‘The Rock’.
Opened in 1933, this once military prison was redesigned to house the country’s most incorrigible criminals. Alcatraz was the most secure penal institution in the whole of America. 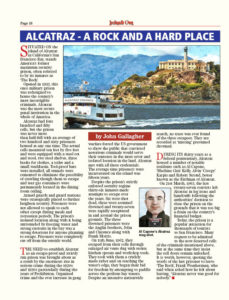 Alcatraz had four hundred and fifty cells, but the prison was never more than half-full with an average of two hundred and sixty prisoners housed at any one time. The actual cells measured ten feet by five feet and were equipped with a steel cot and stool, two steel shelves, three hooks for clothes, a toilet and a small washbasin. Tool-proof bars were installed, all tunnels were cemented to eliminate the possibility of crawling though them to escape and tear gas containers were permanently located in the dining room ceiling.

Armed guards and guard stations were strategically placed to further heighten security. Prisoners were not allowed to speak to each other except during meals and recreation periods. The prison’s isolated location along with it being surrounded by freezing water and strong currents in the bay was a strong deterrent for anyone planning to escape. Prisoners were completely cut off from the outside world.