All are Welcome in the Ceilí House!

Kay Doyle talks to the man at the helm of one of RTÉ Radio’s longest running shows, Kieran Hanrahan of Céilí House.

For hundreds of thousands of listeners, Saturday night just wouldn’t be the same without tuning in to one of RTÉ’s most loved and longest running programmes. Going since the middle 1950s, the exact date when Céilí House first took to the airwaves on Radio Éireann is not known for certain, as there were many different programmes of céilí band music broadcast under various titles up to this. 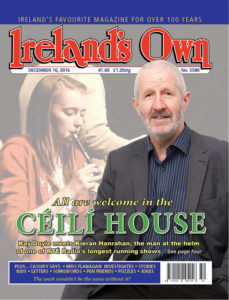 What we do know is that over the course of its sixty plus years, Céilí House has cemented itself as an indispensable part of Saturday night’s entertainment for so many Irish people at home and abroad.

Describing the popularity of the radio show, its presenter of 21 years, Kieran Hanrahan says it’s a privilege and great honour to be the voice that so many people tune in to hear every Saturday night.

“Back in the 1950s, Céilí House was a studio-based programme and the traditional musicians would have to travel to Radio Éireann play in the studio. But in the last 35 years it has become an outside broadcast-based programme, going out into communities,” says Kieran. “It is not about the stars of traditional music but rather about bringing a community angle on the music and the culture. There’s a great ‘grá’ for it.”
Clare musician, Kieran, took over presenting the show in October 1995 from Peter Browne, who would also become his producer. Previous to this, the late Breándán Ó Dúill was the voice of Céilí House for over two decades with his predecessor, Galway man, Seán Ó Murchú serving at the helm.

“From time to time I work on some archive material in RTÉ and when I hear Sean’s voice, and him presenting it, it’s just incredible,” muses Kieran.

Continue reading in this week’s Ireland’s Own (issue 5580)