On his inauguration day, it must have crossed John Fitzgerald Kennedy’s mind, how the great grandson of an Irish immigrant cooper (Patrick Kennedy) and fellow Wexford woman Bridget Murphy, had reached the highest office in the land.
Such a meteoric rise from such humble origins as his ancestors fleeing from the Great Famine, surely told him a familiar tale of gruelling hard work combined with business acumen. 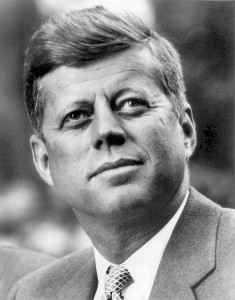 John F. Kennedy’s father Joe Senior, grew wealthier with each passing decade. Marrying Rose Fitzgerald, a member of one of Boston’s Irish community’s first families, Joe Senior brought his considerable energies to the stock exchange and to Hollywood where he helped to found RKO Studies. He also imported alcohol to the US, both during Prohibition and after its repeal.
John F. Kennedy was to be not only the youngest candidate to become President, he was also the first Catholic. Born in Brookline, Massachusetts, on May 29th, 1917, he graduated from Harvard in 1940 and then entered the Navy.
When he returned from the war he became a Democratic Congressman, advancing in 1953 to the Senate.  His Pulitzer Prize winning book ‘Profiles in Courage’ was a series of biographies of eight Senators who had performed courageous deeds.
Having been decorated for bravery himself during World War ll, he was well equipped to write the book.
His commitment to others was reflected in the lines from his inauguration address, lines for which he is most famous: ‘Ask not what your country can do for you. Ask what you can do for your country.’ Kennedy’s father, Joe Senior, had also written a book, a self-published work, ‘I’m for Roosevelt,’ upon following a career in politics.
At a time when money alone couldn’t buy social standing in the snobbish world of Boston high society, when being ‘Irish’ and ‘Catholic’ were regarded as stigmas, politics proved to be the route towards acceptance.
Joe Senior became American Ambassador to the Court of St James in 1932, a title bestowed on him by Franklin D. Roosevelt. Having pumped a fortune into Roosevelt’s campaign, Joe Senior’s role as Ambassador proved to be the reward for his efforts and the direct cause of him meeting the Irish Taoiseach Eamon de Valera in 1938.
This meeting with de Valera proved a major turning point in Irish-American relations, ensuring that the way was paved for his son John, the elected President of the United States, coming to Ireland in 1963.
In 1961, with his beautiful wife Jacqueline Bouvier Kennedy by his side, Kennedy was Inaugurated President.  Snow had fallen overnight, cold and windy weather plagued the city. Temperatures dropped to 9 degrees, going lower in the suburbs. Army flame throwers were employed to clear the snow. The New York Times reported how ‘A Siberian wind, knifing down Pennsylvania Avenue in the wake of last night’s snowfall, turned majorettes’ legs blue, froze baton twirlers’ fingers and drove beauty queens to flannels and overcoats.’
Miss Florida from Fort Lauderdale proclaimed that it was the coldest parade she could ever remember.
Freezing temperature also caused the reporting of women shivering in their fashionable and frail gowns at the five dances which later concluded the festivities while some men reputedly wore long johns under their white-tie formals.
The paper also reported on more serious matters. The leaders of a crippling harbour strike rejected a plea from Governor Rockefeller for a ten-day halt in their picket blockade of railroad terminals and freight yards.
Among the many congratulation communications received on inauguration day was a message from Premier Khrushchev and President Brezhnev of the Soviet Union hoping for a radical improvement in Soviet-American relations.
John F. Kennedy’s handling of the Cuban Missile Crisis in 1962 when he negotiated the removal of Soviet missiles from Cuba, showed his prowess as a statesman. In his inaugural address he had stated; ‘Let us begin anew, let us never negotiate out of fear.’
Also reported in The New York Times of the day that President Kennedy’s younger brother Robert, the new Attorney General, rode down the avenue seated high on the back of his open car, hair tossing in the wind, waving and laughing in exuberant spirits.’
Who could have foreseen this poignant foreshadowing of the events of a few short years later? John F. Kennedy was fatally gunned down in November 1963 while travelling in an open topped vehicle as he paraded through the streets of Dallas, Texas. He had scarcely served one thousand days of his term of office.