“An Ill Wind” – one of the worst storms in Irish history

One of the worst storms in Irish history took place on January 6, 1839, when heavy snow fell throughout Ireland. In Irish history, it is known as the ‘Night of the Big Wind’ or ‘Oíche na Gaoithe Móire.’ At the time, it was the worst storm to hit Ireland for 300 years, writes PADDY RYAN. But it did have its upside some 70 years later. Read on…..

Despite the havoc and destruction caused, the ‘Night of the Big Wind’ on Sunday, 6 January, 1839, also proves the truism that ‘it’s an ill wind that blows no one good.’ However, in this case that good would take seventy years to bear fruit.

Although snow had fallen the previous day, the following morning was reported to have been unusually warm for early January. And along the west coast, the air was so still that voices could be heard between houses more than a mile apart. Then around 3pm, the rain began and the wind that had been blowing from the west changed to veer West-South-West.

The Freeman’s Journal, a day or so later, reported that the wind carried rain with such violence that it broke the glass in windows. In the west, fishermen reported that they could hear a rumble coming from the Atlantic which got louder as darkness fell. Indeed, it was stated that such was the power of the Atlantic that the waves actually broke over the top of the Cliffs of Moher, later that night. 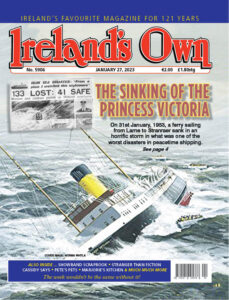 Relentlessly spreading havoc and desolation as it made its way across the country, the strong wind and rain forced farmers to secure their hay and corn ricks along with the roofs of their houses most of which were thatched. It was reported that as it hit the east coast, all the thatched cabins facing the sea in Malahide lost their roofs.
While that was dreadful for those living in them, many people living under slated roofs with chimneys fared little better.

The Freeman’s Journal reported that although a lady living in Clare Street, Dublin had retired to bed, she was crushed to death when the chimneys crashed through her roof. She was one of many people who were killed by masonry and glass in what they perceived to be the safest place in their homes – their beds.

A further horror was the utter darkness light as lamps, lanterns or candles were in great danger of spreading fire to furnishings. As if some demons were at work, the Freeman’s Journal reported that “the Aurora Borealis burned brightly a great portion of the night, mantling the hemisphere with sheets of red and corresponding well with the lurid gleams which ascended to the zenith from the flames of burning houses.”

People had little choice but get away, in the pitch darkness, from wooden cabins that fell in the first wave of the hurricane. Their clothes were soon drenched with the heavy rain, even snow in some parts of the country, that was relentlessly blowing into them.

In rural areas, their only shelter was the hollows and hedges where there was further danger of trees, bushes or the entire hedge being uprooted. In urban areas they sought shelter in police stations and churches.
Of course, these were not immune either as it was reported that in Carlow where the devastation was severe, “one of the eight ornamental spires that crowned the beautiful octagonal tower of the Roman Catholic Cathedral was blown off and coming with great violence against the roof of the building, smashed it and came down on the front gallery, shattering it almost to a wreck.”

Another noted landmark in the same town, “the solitary chimney that topped one of the great towers of the ancient castle of Carlow and which stood the breeze for 600 years, was also blown away.”