Aonghus McAnally – A Man of Many Talents

As he prepares to take his tribute to Christie Hennessy show on tour around Ireland, Aonghus McAnally chats to Kay Doyle about his life growing up with famous acting parents, his long career with RTÉ and returning to his first love of being a professional musician.

Not many children spend their childhood watching their dads come a cropper at the hands of various fictional gangsters on a small box in the corner of the living room, but that was the quirky environment to which a young Aonghus McAnally quickly became accustomed. 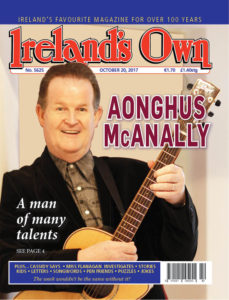 For the “dad” in question was none other than the four-time BAFTA award-winning Irish actor, Ray McAnally. Add to that his Abbey School of Acting-trained mother, Ronnie Masterson, who many will remember for her portrayal of Grandma Sheehan in the 1999 film Angela’s Ashes, and it was inevitable that his theatrical upbringing would influence Aonghus’s eventual choice of career path.

“It was a very theatrical household,” says Aonghus, as he takes a break from preparations for his upcoming nationwide tour celebrating the musical brilliance of his late friend, Christie Hennessy.

“It certainly wasn’t usual for kids to see their dad being killed off in different TV shows, but we quickly got used to it. It was an energetic house with lots of actors and directors and producers coming and going. I felt from a young age that my house was very much alive.

“You never knew who was going to turn up. One night I was going to the Olympia to see Marcel Marceau and my dad said, ‘Look, sure come home afterwards because we have a guest coming to dinner I’d like you to say hello to.’ This man arrived with a lovely much younger woman with him and we were talking and my dad was asking about where I had been and I was telling them how fantastic it was and my dad said eventually, ‘Well, this is Marcel Marceau.’ He had his make-up off and I didn’t recognise him; that was the kind of house it was!”

The McAnallys lived in Artane until Aonghus was thirteen, and then moved to Sutton. He has lived in Portmarnock since 1979, with his wife, Billie, and this is where they raised their two boys, Aonghus Óg and Andrew. In fact, Aonghus has lived all his life around Dublin’s Northside.

When he was thirteen, he first took up the guitar and immediately fell in love with it, telling his father that he wanted to become a professional musician. His proposal was met with instant encouragement, his dad telling him to “give it socks, and do it to the best of his ability”.

Hugely successful in the entertainment world himself with well-known films such as The Mission (in which he starred alongside Robert de Niro) and My Left Foot to his list of credits, Ray backed his son to “chase his dreams”.