Appert – the Tin Can Man 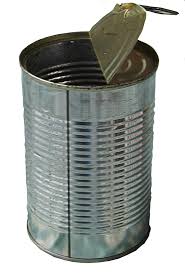 The new girl in our office was a swan – pale, beautiful and elegant – ash blonde hair and grey eyes. She seemed to be opaque until at ‘Elevens’ she went off to put on her face.

And what a face – a little pencilled definition of her eyes and a touch of colour on her cheekbones and she was a dream. A Princess Grace face and figure. There were boyfriends galore who collected her after work in roaring bangers and sports cars until that special one arrived in a purring Merc – his name was Marcus.
One day I heard her on the phone offering to cook dinner for him, and he accepted with alacrity.
When she put down the phone I reminded her that she couldn’t cook.

Undaunted, with a tra-la-la, she went out to the corner shop and bought five cans – stewed steak chunks, new potatoes in brine, peas, peaches and cream. God bless the man who invented the tin can, she said. What could I say but ‘Amen’ to than? But who was he? Who was the man who invented this ingenious method of food preservation? His name was Nicolas Appert. A Frenchman. There is a street in Paris named after him.

Napoleon Bonaparte said that –  “An army marches on its stomach”  and because he had his army march so far and so fast they had very little time to stop and search for supplies not to mention cooking food.
Worse still, when Napoleon pushed forward into Russia, the retreating Russians had taken every scrap of food along the way.

As a result, Napoleon’s army suffered hundreds of casualties from scurvy and malnutrition – even more than were lost in battle.