Arthur Griffith – Death of a Statesman

Arthur Griffith, the founder of Sinn Féin and one of the fathers of the Irish Free State, died on August 12, 1922. Paula Redmond remembers the politician and writer who Michael Collins described as a ‘mighty force in Ireland’.

On August 12th 1922 nationalist, politician and journalist Arthur Griffith died aged fifty-one. Just a short time earlier Griffith had headed up the delegation party who negotiated the Anglo-Irish Treaty that resulted in the formation of the Irish Free State.

Born in Dominick Street, Dublin in 1871 to parents Arthur Charles Griffith, a printer and Mary Griffith (née Whelan), he attended the Christian Brothers schools at St. Mary’s Place and Great Strand Street. At the age of thirteen he left school and initially found employment as an office boy with a family named Underwood who owned a printing company.

He then trained as a printer, serving his apprenticeship as a compositor with the The Nation newspaper. In 1891 he took up the position of copyreader at the Irish Daily Independent and became a member of Dublin’s typographical craft union in 1894. 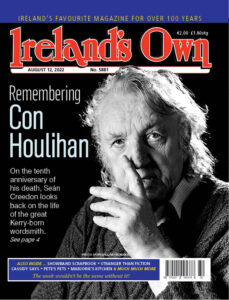 After leaving school Griffith continued to educate himself. An avid reader, he bought books with any spare money he had and also spent much time in the National Library. He was a supporter of Charles Stewart Parnell up until Parnell’s death in 1891.

His involvement in debating societies led to him meeting poet and journalist William Rooney. Griffith began to write articles and in July 1892 eight articles were published in the Dublin Herald, credited to Griffith and Rooney. The pair also founded the Celtic Literary Society in 1893 to promote the Irish language, history, literature and music.

The printing trade went into recession in the late 1890s and in 1897 Griffith travelled to South Africa. He first edited the Middelburg Courant. However, the publication did not do well – British readers did not like Grifffith’s support for the Boers and Afrikaners wanted publications printed in their own language.

When the magazine went out of business he got a job as a supervisor in a gold mine in Johannesburg. In the 1950s Griffith’s son stated that his father’s move to Africa was due to a diagnosis of incipient tuberculosis – he thought the warmer climate would help him.

He later returned home and took up work as editor of the political paper the United Irishman, launched in 1899. Its origins were in another publication Shan Van Vocht, published by two ladies in Belfast – Anna Johnston and Alice Milligan. Both Rooney and Griffith had written articles for this paper. The ladies closed the publication and gave their list of subscribers to Griffith and Rooney.

Under-resourced, Griffith and Rooney often ended up writing all sections of the paper themselves. Nationalist Maud Gonne helped to finance the publication and raised funds for it.