Arthur Shields – the actor and rebel died 50 years ago

ARTHUR SHIELDS was born in Dublin on the 15th of February, 1896. He was one of eight children born to his parents, Adolphus Shields, a journalist, and his wife, Fanny Sophia Ungerland, who was a German.
He had an older brother, named William Joseph Shields. But, he became an Oscar-winning actor, better known by the stage and screen name, ‘Barry Fitzgerald’.

By religion, his family were Protestants. However, his father, Adolphus Shields, was a socialist and labour organiser.
And, so it was, that under the influence of his socialist father and some Nationalist friends, young Arthur became involved in the Irish Volunteers.

As a child, he had the usual schooling until the age of fourteen.He then went into employment, but, his main interest in life was acting.

His first appearance on the stage of Dublin’s Abbey Theatre was in 1914. The following year, 1915, he secured a full-time contract with the Abbey, and remained with the Abbey until he left Ireland in 1939.
The following year, 1916, he was on tour with the Abbey Theatre. However, he returned to Dublin just in time to take part in the Easter Rising. He fought in the Rebels’ Headquarters, the General Post Office and, after the surrender, he was interned in Frongoch Internment Camp in Wales. 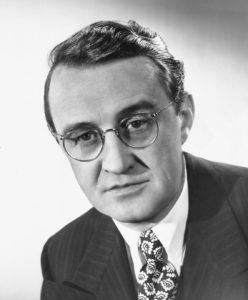 Here, he organised a ‘Frongoch Dramatic Society’ among the internees, and, took a prominent part in camp dramas.
The British Government set up a Committee to examine the matter of internment. Shields appeared before this Committee.

One member of the Committee recognised the internee, Shields, as he had seen him on the Abbey stage.As a result, his release was ordered, and, one source has it that Shields was advised by the Committee to forget about revolution, and to stick to acting.

He appears to have heeded this advice, as there is no record of any more involvement in either revolution or politics. Instead, he stuck to acting. On his return to the Abbey, he had a successful and varied career – as actor, assistant director, director, and, eventually, stage manager.

His promotion to stage manager earned him the nickname, “Boss”.

Before he left Ireland for good in 1939, he made some films in Hollywood for the famous Irish-American film director, John Ford, with whom he had a long-lasting working relationship.
One film which he made in America under John Ford’s direction was The Plough and The Stars, based on Seán O Casey’s play.

The action in this film was set in the 1916 Easter Rising, which was an historic event in which Arthur Shields had actually taken part!
While working in America, he broke his leg. And, while recovering in hospital, it was discovered that he had tuberculosis.

He was advised that the dry climate of California (rather than the damp climate of Ireland) would assist in his recovery.
This put paid to his planned return to Ireland, and he lived for most of the remaining thirty years of his life in America.
He settled in California, where his career in Hollywood as a film actor was even more successful than his career as a stage actor in Dublin.

One enterprising researcher has listed no less than seventy films in which he appeared.

One film which is well-known to Irish people is the 1952 film, The Quiet Man. Filmed on location in County Mayo by John Ford, Arthur Shields acted the part of the Reverend Cyril Playfair (below).

(In fact, he acted the part of either a priest or clergyman in no less than seventeen of his seventy or so films!)
He appeared alongside his real-life brother, William Shields (otherwise ‘Barry Fitzgerald’) in the same film.
But, ‘Barry’ played the part of Michaeleen Oge Flynn, a compulsive mischief-maker, whose sole purpose in life was locating his next drink.

Then, starting in the late 1940s and early 1950s, a new entertainment medium appeared – television.
Arthur Shields proved to be remarkably versatile and adapted quickly to this new medium.
He appeared in episodes of Rawhide, Bonanza and several other television series which were later broadcast on Irish television when it became available in the 1960s.

But, increasing ill-health took its toll. His visits to Ireland became less frequent, and, a trip home in 1964 was his last.
He probably became acutely aware of his own mortality when his brother, William (‘Barry Fitzgerald’) died in Dublin in 1961.

Eventually, Arthur himself died in Santa Barbara, California, on the 27th April 1970, fifty years ago.