Athlone – A Town Steeped in Nostalgia

Nestling on the Shannon and close to Lough Ree, the town and surrounding area is steeped in a history which has been appreciated by locals for centuries, but has been growing in popularity with tourists in recent times,
writes David Flynn.

Athlone is a town in the centre of the country which has the River Shannon flowing through it and, interestingly, with a bridge that effectively splits the town between two counties – Westmeath and Roscommon – and two provinces, Leinster and Connaught. 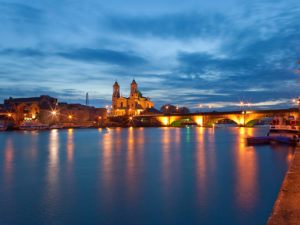 The town is steeped in history, both ancient and modern. Athlone Castle has stood on the Connaught side of the bridge overlooking the River Shannon for more than 800 years. A steep walk up to the courtyard of the castle opens up into a world of Athlone’s long past, much of which can be experienced in the castle’s museum.
Across the road, to the other side of the bridge, is the Luan Gallery, which also overlooks the River Shannon. The gallery, which opened in 2012, features selections of modern and past art.

Between the villages of Ballykeeran and Glasson, on the left-hand side of the road, there is a scenic viewing point, which is elevated above the water. Glasson village, five miles from Athlone is known as ‘The Village of the Roses’.

Lough Ree is the largest lake on the River Shannon, and hosts fifty-two islands, many of which housed residents up to a couple of decades ago. Lough Ree is 29 km in length and the lake also hosts some of the most beautiful flora and fauna in the country.

A notable lakeside woodland off Lough Ree is Portlick Woods, near Glasson, Co. Westmeath. It has beautiful walkways through its forest, and the walk eventually brings you to the waters of Lough Ree.

Continue reading in this week’s Ireland’s Own (issue 5605)