Ballad Sheet – Banks of My Own Lovely Lee

Some say the words of ‘The Banks of My Own Lovely Lee’ were written by Richard Forbes or by John Fitzgerald (‘the Bard of the Lee’), but there is little solid evidence to support the claim. What we know for certain is that the song was sung by a ‘Mr. Maurice Mulcahy’, on Monday, the 26th of August, 1901, in Clonakilty, County Cork, at a concert held to raise funds for the completion of a local monument to the memory of those United Irishmen who in June 1798, engaged British troops at the Battle the Big Cross, Shannonvale.

According to the Cork Examiner, Mr. Mulcahy was given “a great ovation” for singing that “well known and popular song, ‘The Banks of My Own Lovely Lee’.” 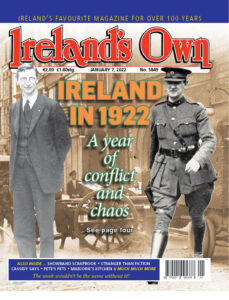 It was not until St. Stephen’s Day 1935, that the song was officially copyrighted, but the actual copyright notice, registered with the Library of Congress, Washington, does not give the name of the lyricist, only the name of the composer of the music, the name cited as James Charles Shanahan.

In the early 1900s, the Cork Examiner said that he was “a prominent figure on local concert platforms,” a somewhat understated way to describe this talented young pianist and dyed-in-the-wool Corkonian.

His younger brother Leonard was also an accomplished pianist and it seems that another sibling, William, was a competent violinist. In July 1904, James, then aged twenty-five, was appointed as resident organist to Saint Francis’ Church, Liberty Street, Cork. Four years later, D. Nunan & Co. published the song ‘Our Friend Sails Tonight’, music by J. C. Shanahan and words by none other than T. D. Sullivan, writer of that popular ballad, ‘God Save Ireland’.