In part 22 of this series, Eugene Dunphy explores the history of a much-loved song.

It was published in London in early 1950 and by the summer of 1952 the sheet music was available to buy at Quigley’s Music Stores, Ballyshannon, County Donegal. Then on the 15th of February, 1953, it was sung by twenty-two-year-old County Derry tenor, Neil Murray, at a concert in St. Columb’s Hall, Derry. Such were the first tottering steps of that alluring ballad, The Green Glens of Antrim.

Not to be confused with The Blue Hills of Antrim, a much earlier song by Joseph Campbell, the words and music to The Green Glens of Antrim were composed in the late 1940s by Scottish songwriter Archie Montgomery (pen name ‘Kenneth North’), then Secretary to the British Music Publishers Association, Sackville Street, London, W1. 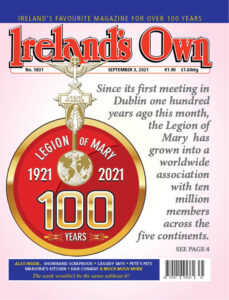 Written in waltz-time and consisting of three verses, the song celebrated those nine undulating natural wonders that are Glenariff, Glenarm, Glenballyemon, Glendun, Glenshesk, Glencorp, Glentaisie, Glanaan and Glencloy.
Within weeks of composing the ballad, Montgomery tried to pitch it to established American, British and Irish artistes, but few showed interest, that is until Bing Crosby recorded another of Montgomery’s songs, Tobermory Bay, in 1954. From that year on, Montgomery became the new kid on the songwriters’ block.

Dublin-born singer Carmel Quinn was one of the first artistes to record The Green Glens of Antrim. Carmel emigrated to the US in 1954, and won first prize the following year on the CBS radio show, ‘Arthur Godfrey’s Talent Scouts’.

Having signed a contract for Columbia Records, The Green Glens of Antrim featured as the second track on Arthur Godfrey Presents Carmel Quinn, an album released to rave reviews in March 1955. New York newspaper, The Buffalo Courier Express, described the Dublin girl’s singing voice as being ‘of considerable range, equipped with a soft brogue which garbs all of her songs in an authentic atmosphere of Érin’. Carmel subsequently made guest appearances on television shows hosted by Pat Boone and Ed Sullivan.

It’s not known if Montgomery actually visited the north-east coast of Ireland, but his song speaks of an exile longing to return home to the Antrim glens, and to experience again the special welcome of the people, particularly those living in and around ‘my own Cushendall’.