Barney Hughes – the man who revolutionised the bakery in Ireland

Belfast of 1827 was home to some thirty master bakers. They distributed bread and bakery products to a largely poor and hungry populace of sixty-five thousand inhabitants.
In their day, the master-baker was king.  Many families depended on bread and potatoes to form part of their staple diet. Often bakeries would hold back the cheaper cuts of bread in favour of selling more expensive bread, resulting in the poor being unable to buy their daily rations. 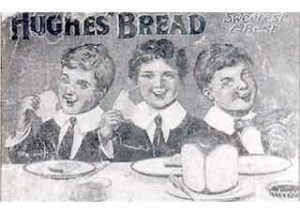 Bakery hours were long and the work hard.  Bakers were expected to work a seven-day week, many sleeping on the premises as part of their remuneration package. To speed up the mixing process, bakers would often mix dough with their hands or feet, resulting in the sweat of the brow mingling freely with the dough.

Conditions for the men were cramped Victorian.  The shop floor, as such, was candle lit, unventilated and the fumes from the ovens, combined with the inhalation of flour dust, often resulted in the bakers contacting tuberculosis.  Life expectancy for many bakers was short.

Into this arena, of toil and sweat, appeared a young, unknown eighteen-year-old journeyman baker by the name of Bernard Hughes.