In July 1948, Gail Halvorsen had been flying three round trips a day from Frankfurt to Berlin’s Tempelhof airfield. The flights were an absolute necessity because the Russians had closed off all land access to West Berlin and if the allies couldn’t supply the 2,000 tons of food required each day, the population of West Berlin would starve.
During one rest period, Halvorson borrowed a jeep and drove to the end of Runway 27 where he saw a group of children.

“They could speak little English”, he said later, “their clothes were torn and patched and I realised that most of them wouldn’t have had any candy or gum for years.”
He did have some gum, but not enough for all of them. He broke the sticks of gum into small pieces and handed it over.They shared it out and those who didn’t get any sniffed and licked the wrappers. 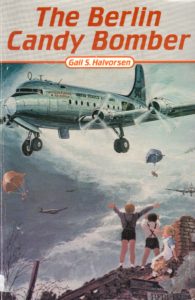 He told them to come back the next day and he would have gum for everyone. He would drop it from his aircraft. But how would they know which plane was his, they asked, He told them he would rock his wings from side to side as he approached the runway.

Back in Frankfurt, he bought extra gum and chocolate and begged more from his fellow pilots. The following day, as he approached Tempelhof, he ‘waggled’ the plane’s wings before releasing the packages attached to tiny parachutes made out of old handkerchiefs.

The children hadn’t told any other children but somehow, others found out what was happening and the crowds at the end of Runway 27 grew bigger.

After a month or so, Halvorsen was told that the man in charge of the airlift, William Turner, wanted to see him. As Turner was something of a curmudgeonly character, Halvorsen feared the worst.

To his delight, Turner was all in favour of what was happening. It was ‘good publicity’ and all future drops would be code named ‘Operation Little Victuals’.

The media picked up on the story and, once news reached America itself, it seemed that everyone wanted to help in some way. Entire classes sent packs of chocolate, some already attached to home- made parachutes.

Candy and chocolate manu-facturers sent tons of confectionary, so much that a college student, Mary Connors’ took charge of what had become a national project. She worked with the National Confectioners Association to prepare the candy and chocolate and have the packages attached to parachutes. Soon virtually all the airlift pilots were making ‘drops’ on a daily basis.

The pilots were soon nicknamed the ‘Candy Bombers’ whilst Halvorson himself became known as ‘Uncle Wiggly Wings’ as well as the ‘Chocolate Uncle’, the ‘Gum Drop Kid’ and the ‘Chocolate Flyer’.