Alfred Byrne (better known as Alfie) was born 140 years ago on St. Patrick’s Day at No. 36 Seville Place, East Wall, Dublin. Alfie was the son of a docker, and eldest of 11 children. He grew up in the hard-working class surroundings of Dublin’s north side but rose up through society to become a middle class businessman, and a well respected and well recognised local politician.

When he left school at 13 Alfie began working as a theatre-hand. From there he found employment as a bicycle mechanic and then a barman. He would buy his own bar, The Verdon at 37 Talbot Street, at the age of 27. It was at this time that he also got involved in politics, and thus started his long career as a public servant.

His popularity had grown beyond the Pale and his title of Lord Mayor of Dublin was often called ‘Lord Mayor of Ireland!’ He was also called ‘the shaking hand of Dublin’ due to his habit of shaking hands with every person he met, be it a pauper or a prince!

Stage icon Jimmy O’Dea often told a joke about ‘The shaking hand of Dublin’ – a cyclist who failed to signal a right turn on O’Connell Street was stopped by a guard. When asked by the guard why he did not signal, the cyclist replied, “Ah sure, if I stuck me hand out Alfie Byrne would shake it!”

In 1937, a new Irish Constitution was drawn up by Eamon de Valera and it included an article which established the office of the president. In 1938, nominations opened for candidates and the first one out of the blocks was the shaking hand of Dublin!

When nominations for the Irish Presidency opened in April 1938 the press floated the idea that Alfie would be perfect for the ceremonial role. Alfie did indeed have such aspirations of higher office and he went along with the press in promoting such notions.

On the 20th of April The Irish Times printed an article promoting Alfie’s interest in becoming Ireland’s first president. The article caused some concern in Leinster House and the following day Eamon de Valera met his political rival W.T Cosgrave to put in place a plan to stop Alfie. 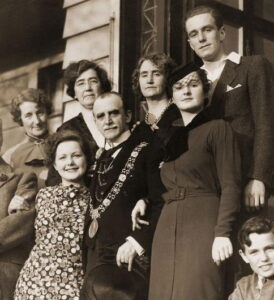 Dev and Cosgrave did not agree on a lot but on the matter of Alfie Byrne becoming president they both agreed against it. They came to the conclusion that only one candidate should be put forward. That candidate was the Gaelic scholar Dr. Douglas Hyde.

The reason for this rare show of unity between the civil war parties lay in the fear they had of Alfie’s popularity among the public.

When news reached Alfie that he was being pushed out from the race to the Áras he issued a statement to end his presidential campaign, which had lasted just two days!

Alfie was a small man in stature who wore Edwardian clothes and sported a dandy moustache, but he was wildly popular among all people.

It was this popularity which resulted in Dev and Cosgrave choosing a candidate who was less well known, quiet in nature and more importantly less popular than a party leader. Those in Leinster House held a fear that a highly popular, albeit eccentric, figure like Alfie Byrne could use the office of president beyond it’s curtailment. After all, this was the 1930s, the age of dictatorships! 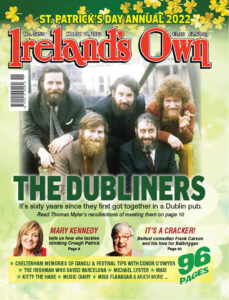 When the deadline for nominations came there was but one candidate – Dr Douglas Hyde. On the 15th of June, 1938, Dr Hyde was inaugurated as Ireland’s first President. As Lord Mayor of Dublin Alfie Byrne was there for the historic event, though he felt bitterly disappointed.

For many years Alfie refused to speak about the plot that kept him from being the first President of Ireland. When he died in 1956, at the age of 73, he still harboured bitterness over the 1938 presidential deal struck between Fianna Fáil and Fine Gael. Alfie Byrne could have been Ireland’s first president but his popularity proved his downfall!