After many years in Dublin, one of Ireland’s best-known and best-loved poets, Brendan Kennelly, is back living near the small north Kerry village of Ballylongford in which he grew up. Now in his early eighties, Kennelly has had a remarkably prolific career as the writer of over fifty books and as a long-time Professor of English Literature at Trinity College, Dublin, writes Anne Keeling. 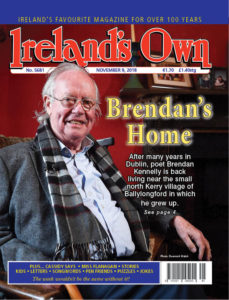 Brendan has departed the bustling capital city he loved and resides just outside Listowel, home of Writers’ Week – the annual literary and arts festival Kennelly co-founded. He is close to his family, particularly his sister Nancy McAuliffe, whom I had the pleasure of meeting.

Brendan Kennelly is one of Kerry’s great men of letters, along with John B. Keane and Bryan McMahon. I spent some enjoyable hours in his company, hearing about his love of Dublin and the Dubs, his love of talking, politicians and their wiles, the characters he knew, and a chance meeting that changed his life.

His first taste of Trinity College, when he was awarded the Sizarship (a scholarship associated with the Sandes family still available to students from Co Kerry), was as a lone young country boy in a rarefied environment.

“I was at Trinity at the time when it was a mortal sin for a Catholic to go,” he says good-humouredly, “you know, the Dubs used be outside in the street – (sings) ‘In Trinity College they have no knowledge, they go to school to play the fool, and that’s flipping Trinity College.’ Who was the Archbishop of Dublin … John Charles McQuaid? He couldn’t stand the place! Ah, I think it was those times when being in one sort of religious situation gave you the sense that you were superior somehow or other. Sure that’s still there in people. Like Cork and Kerry.”

Perhaps feeling alienated in what was a Protestant enclave at the time, Brendan left Trinity in order to broaden his horizons and travel a little. He spent time in England and France but it was his destiny to return before too long to the university he’d left and he went on to achieve his PhD there in 1966, writing his thesis on Modern Irish Poets and the Irish Epic, and, soon after, he commenced his lecturing career in the Department of English.

He embraced his adopted city with great enthusiasm.

“I loved being in Dublin. I was there for over forty years. And I love the Dubs.”