Bridging the Gap – a Wicklowman’s Contribution

JIM REES looks at the role played by Robert Halpin, arguably one of the most important mariners in the 19th century, in helping to make the world a global village by connecting empires and continents via submarine telegraph cables.

Those of us of a certain vintage will remember watching black-and-white television images of the first men on the moon in 1969. It looks old hat now and younger people can be forgiven for smiling benignly at us as they think ‘You sad old creature’.

Okay, so they weren’t the greatest images in the world, but that’s the point – they weren’t from this world. We were watching men on the moon!! We were witnessing a technological leap that was unimaginable just a few years earlier. 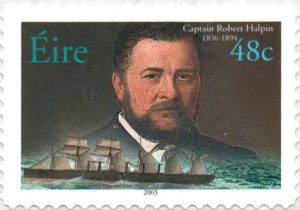 A hundred years before that, another technological leap – every bit as mind-boggling for those who experienced it – saw the Atlantic ocean bridged by telegraphic cable. Communication between Europe and the north American continent was cut from two weeks by steamship – and possibly ten weeks by sailing vessel – to little more than an hour.

Sending electrical impulses along a cable was a well-established practice. The question was: how could those impulses be turned into intelligible messages? Several great minds of the age were engaged in this, but it was the American Samuel Morse who invented a code that still bears his name.

On paper he allocated each letter of the alphabet a sequence of ‘dots’ and ‘dashes’. In practice a ‘dot’ was a short electrical contact and a ‘dash’ a longer one. The best known today are the letters ‘S’ (three dots) and ‘O’ (three dashes). The emergency call SOS (‘save our souls’) is …—…  Tap it out and you’ll see.
This code quickly became internationally accepted and soon most major landmasses had telegraphic messages whizzing through wires across hundreds, if not thousands of miles. There was, however, another hurdle waiting to be encountered.
How could you send an electrical current across water?

Obviously, insulating the cable wire was the key and it took a while to get the right material in the proper quantities to achieve success. Soon, rivers and lakes proved no barrier – but the sea was a different kettle of fish.

The logical location to carry out extended trials would be to link Europe with Britain, laying a submarine cable between Dover and Calais, a distance of twenty-two miles. This milestone was achieved in 1851. Next came the longer distance of joining Holyhead to Howth. Again, success.