Bridie Gallagher – the Girl From Donegal

On the tenth anniversary of her death, author Colm Keane revisits an interview he did with the iconic singing star who, at her peak, was not only the hottest musical property in Ireland but could match the pulling power of any international star abroad.

The weather in London on St. Patrick’s Day, 1959, was mainly cloudy and bitterly cold. They were not the sort of conditions that would prompt people to stray outdoors. Yet that is what more than 7,500 Irish emigrants did as they converged on the Royal Albert Hall to hear Ireland’s popular balladeer and first international singing star, Bridie Gallagher.

That night, Bridie set a record for the Royal Albert Hall that would never be surpassed. The streets outside were packed. Mounted police kept the crowds in check. Backstage, Bridie was a nervous wreck as comedian Frank Carson, Enniskillen’s Skyrockets Showband, the Lily Comerford Dancers, and a long line of warm-up acts, went through their routines. 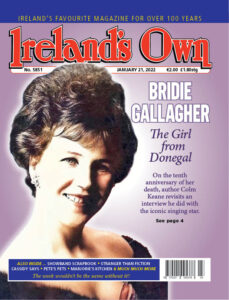 Bridie’s manager, Phil Solomon, inquired if she was alright. “Of course I am,” she replied. She did ask, however, if she could get onstage quickly as her nerves were fraying. Solomon, who obviously had little time for the harp, immediately asked harpist Deirdre O’Callaghan, the night’s second-last act, to play her instrument like a banjo, just to get Bridie on. A bemused O’Callaghan duly cut short her set.

Bridie’s arrival onstage brought the house down. The 7,500 in attendance erupted in wild applause. None clapped louder than her compatriots from Donegal, whose London social club had rescheduled its St. Patrick’s Day function just to attend the event. Encore followed encore. It was, Bridie later said, her best-ever show.
“Talk about Beatlemania!” she remarked. “It was Bridiemania then, before the Beatles, it really was!”