Bryan Dobson – The Man With the News

After 20 years fronting the nation’s flagship news bulletin, Bryan Dobson has witnessed many historic happenings, from the election of Nelson Mandela as the President of South Africa to the election of Barack Obama as the first black President of the Unites States, while closer to home the signing of the Good Friday Agreement and the visit by Queen Elizabeth – the first by a reigning British monarch in over 100 years – were stand-out moments in a career doing what he loves. He talks to Thomas Myler

It’s coming up to 20 years since popular RTE newscaster Bryan Dobson first presented the station’s Six One News. It was in September 1996 that he sat before the cameras in Studio 3 for his debut on the channel’s flagship early evening news bulletin, formerly called Newstime which was co-hosted by Ann Doyle and Sean Duignan. 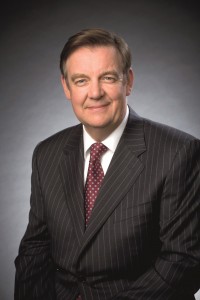 Fast forward to 2016 and Bryan presents the programme with Sharon Ní Bheoláin, who came on board nearly three years ago. He has brought viewers major stories over the years including Queen Elizabeth 11’s visit here in the summer of 2011, the IRA ceasefire in 1994, the Good Friday Agreement in 1998 and Nelson Mandela becoming president of South Africa in 1994 after 46 years of apartheid.

“The election of Mandela would have to be high among my favourite memories, probably the No 1,” he says over coffees in the RTE canteen. “Here he was, head of the African National Congress, the ANC, as the country’s first black chief executive, having spent 27 years as a political prisoner on Robben Island.
“I had worked in RTE for a number of years and it was a great honour to travel to South Africa and cover the occasion. Around 60 world leaders were there – presidents, prime ministers, princes and so on.
“it was quite exceptional and a moment when you see the pages of history turning one of those rare moments when you could really feel optimistic about the human condition. No question about that. It was very emotional to see such huge numbers of people, black Africans, queuing in the hot sun, in some cases for days.
“The counting of votes took three days as Mandela swept to power. April 27 is now a public holiday in South Africa, and the occasion was something I will never forget.
“While in South Africa I had the opportunity, too, of interviewing Yasser Arafat, the Palestinian leader, and got his views on the Middle East situation.
“The Good Friday Agreement was another historic occasion. It was such a long time coming and involved so many false starts and difficult negotiations that people thought it would never happen. Then, there was that final push in the early spring of 1998 that it all happened.