Recruitment posters played a crucial role in World War I, encouraging young Irishmen to join up and play their part in the war effort, writes Eileen Casey.

The editorial from a provincial newspaper – The Midland Tribune – in August, 1914, reports on a man named Aloysius Brennan found tearing down an army recruitment poster at Market Street, Tullamore, Co Offaly. Brennan was arrested under Clause 13 of the Defence of the Realm Regulations and prosecuted in October of that year.
In the event, Brennan was sentenced to one month’s imprisonment with hard labour. The editorial did not identify the torn down poster which warranted the sentence but it was obviously incendiary in terms of sparking an emotional response. 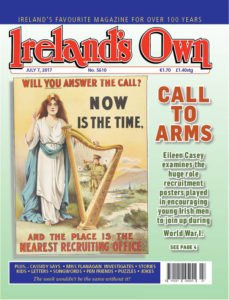 These recruitment posters were crucial in a war that has been described as a ‘total’ war and which depended on mass mobilisation. Supplying manpower, maintaining the basic functions of government and keeping food supplies flowing were also crucial elements in the war effort.

Poster campaigns were employed to keep up civilian morale, to advertise war loans, convey information, convince the population of the justness of the national cause and to demonise the enemy. Posters and their symbolism together with their potential for propaganda were weapons in themselves.

By 1914, there was a high level of literacy in Western Europe, North America and Australasia. Striking pictures and brief captions were extremely effective in defining the First World War for subsequent generations.

Although posters were prolific at the time, they are now largely forgotten except for the iconic ones such as Kitchener’s “Your Country Needs You”, showing the Field Marshall’s pointing finger hurrying laggards into the army.

In the early twentieth century, the absence of telephone and television necessitated finding a mass media tool which would fulfil the purpose of reaching and persuading a wide audience to support the war effort. A poster could reach people in every walk of life, in both city and urban settings. Posters could be produced relatively cheaply and quickly.

Herbert Asquith (1852-1928) first declared war on Germany in support of neutral Belgium. This declaration had been expected for many months however and men began to enlist a few hours before it was announced. From August through September 1914, the average intake was over 1,600 a day. Posters appeared in 1915, printed by M’Caw, Stevenso & Orr, Ltd. Dublin & Belfast, playing on ‘The Real Irish Spirit’ and declaring “I’ll go too!”

Artists, designers and illustrators were commissioned by official committees to create propaganda material. The majority of these artists remain anonymous but the ranks included names such as Frank Brangwyn (1867-1956), who produced over 80 designs for Britain, Europe and the USA, and illustrator Alfred Bestall (1892-1986) – later to depict the much loved children’s character Rupert Bear.

When America entered the war on 6th April, 1917, a ‘Call to Arms’ propaganda campaign was the first priority. James Montgomery Flagg (1877-1960), a young illustrator and artist was responsible for the very famous “I want you for US Army,” which was a variation on the Kitchener poster. Flagg used his own image for the character of ‘Uncle Sam,’ dressed in tall top hat and blue coat with pointed finger.
The recruitment posters in 1914 were aimed at enlistment which remained free choice until 1916 when conscription was introduced to sustain troop numbers. If the earlier messages focused on stimulating a sense of adventure, camaraderie, friendship, solidarity, conscription promoted patriotism to uphold support for the war and to motivate fundraising.

When the USA joined the war in April, 1917, their posters for recruitment were upbeat in contrast to those of battle weary, money poor Britain. However, in 1914, emotional blackmail appeared to have worked in convincing men to enlist, as opposed to being conscripted. The shame of being handed a white feather in the street or being shunned by friends was enough to spark the impetus to sign up for duty.

Continue reading in this week’s Ireland’s Own (issue 5610)