Does a man from County Down. who died in the middle of the 19th century, hold the answers to a puzzle which has baffled people for nearly 200 years, asks Michael Smith.

The man in question is Banbridge-born Francis Crozier and the enduring mystery is what happened to the tragic Franklin Expedition to navigate the North West Passage which disappeared in the Arctic ice in the 1840s with the loss of 129 lives – including Crozier.

Hopes of finally solving the puzzle have rocketed ever since specialist search teams from Canada finally discovered the expedition’s lost ships, HSM Erebus and HMS Terror, submerged in cold shallow waters high above the Arctic Circle. Crozier was captain of Terror and in command of the expedition after the sudden death of the leader, Sir John Franklin.

While the bacteria and worms typically found in warmer waters cause serious damage to wooden ships, the cool Arctic waters, poor light and build-up of sediment are providing a convenient shield to preserve Erebus and Terror. Search teams have been astonished at the remarkably good condition of the vessels after so long underwater. 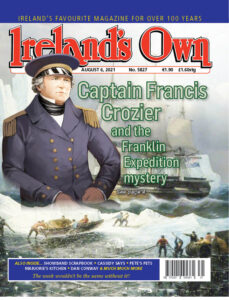 Much speculation surrounds Crozier private desk, which has been captured by video cameras sent into the murky waters about 24 metres (90 ft) below the surface. Marine archaeologists are highly optimistic that the desk, which is fastened to floor and in perfect condition, will contain vital logbooks, charts, diaries and even personal letters written by Crozier before he perished.

Experts also believe that, helped by modern techniques and the latest technology, it will be possible to read any documents recovered from the seafloor, despite spending at least 170 years undersea. Mid-19th century paper was stronger than modern paper because it was made from cotton and linen fibres and hence they are more likely to be legible than, say, paper from 2021 which lay underwater for 170 years.

The anticipation of what lies in the drawers of Crozier’s desk will reach fever pitch when the search, which was called off because of the global pandemic, resumes in the near future. Crozier, who sits at the heart of this remarkable tale, may be waiting to reach out across the centuries.

It all adds up to a fascinating story which I have explored in my new book, Icebound in the Arctic – The Mystery of Captain Francis Crozier and the Franklin Expedition.

Viewers of the recent TV series The Terror will recall the graphic fantasy-horror tales of doomed explorers trapped in the ice, brutal monsters and even gory cannibalism. But the truth behind the fiction is even more dramatic.