We went to the wake of an old farmer, ninety years of age. He had signed over the land thirty years before, but lived in his own house until he died. 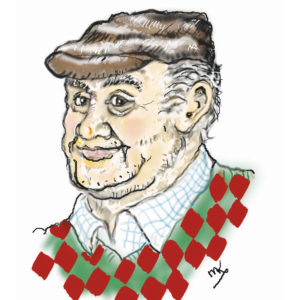 The son, who inherited, and his wife, had treated the old man reverently, and when he got ill, treated him like a favourite child, reversing the roles and making sure the old man had a good life among his own.

None of your removal to the old folks home for your own good in this house. (I say this without prejudice to situations where the nursing home option is the right one).

As happens at a wake of an old person who had buried most of his contemporaries, friends and enemies, the gathering was mainly of the children, now in their sixties, of the next generation.

There was more an atmosphere of celebration than sadness. Then, without any preamble, didn’t a sing-song break out, starting with ‘The Fields of Athenry’. It was about 10.00 pm and it seemed the most natural thing in the world, and what happened next was the ‘noble call’.

Jim called on Alice, who sang ‘One Day at a Time’, who then called Joe, who sang ‘Cill Cais – Cad a dhéanamid fasta gan adhmaid’, and who was prevailed upon to sing ‘The Last Rose of Summer’, before Monica was coaxed to give us the ‘Connemara Cradle Song’.

The hearts of those grieving was softened. We didn’t leave in a hurry, but we did leave at midnight, and heard the following day that the last song was sung about 3.00 am.
There is something liberating about spontaneous, non-competitive singing in an environment where people just love to sing. There are gatherings everywhere, but you need to know where to find them. If you want a session you can go to Jack Meade’s in East Waterford. The Deise Boys, admirably accompanied by Mary O’Mahony on vocals and guitar, whip up a grand stave and anybody there is invited to sing a song.

What happens is that the music catches, nobody needs inviting, and as one song ends on a strong chord, another breaks out. I’ve seen it myself on a few occasions. One of the most memorable was when a professor in WIT, Mick Howlett, took to singing ‘You’re never too late to start livin’, and once the chorus was anchored there was no stopping the assembled revellers.

As it turned out, most of the crowd that evening were oldies, so the song had a certain resonance. I was having a good night, and was unaware that I was humming Mollie Malone, so I was given the floor to get this song going and then it was taken over by the rest of the clientele, who added grace notes and a second line of melody. We sang till closing time.

Sing when you can. If there was more of this, there would be less misery burdening the world.

Read Cassidy Says every Tuesday in Ireland’s Own