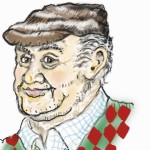 If I fail to dodge purgatory, I suspect I will be sentenced to one or more of the following: stuck in traffic jam for hours on end; put on a committee; or lined up in an endless queue.
Sometimes people say about the sick that they have put their purgatory over on ‘this side’, and when it comes to committees I have paid my dues. However, I’ve still to reconcile myself to the fact of traffic jams and queues of various sorts, finding it hard to describe them as anything but a shocking robbing of time, and designed to raise the blood pressure.

“I’ve a lot to learn,” says she, because “you don’t know how lucky you are with what passes for a traffic jam around here”, and “I’ve never know you to be in a queue for more than one hour.”

So you see, I’ve no ally there, and what she says is true, but there are different strokes for different folks.

First the traffic jam. Have you noticed Olwyn Foley and others on the traffic bulletins in the morning: ‘slow off the M50 at such-and-such an exit’, ‘horses causing delay on the Childers’ Road in Limerick’, ‘traffic heavy at the Jack Lynch tunnel’, in Cork.

Sometimes, even with their matter-of-fact voices, you’d think that it was a privilege to be in a car getting news that you are about to be caught in a traffic jam.

It happened to me on the N11, where they are doing a stretch to make it the M11. It’s a nice piece of engineering, but, on the day we had to cross it en route to Wicklow, it just happened that a ‘stop-go’ system went all ‘stop’ on our side.
Herself started to ‘hum hum’, and fiddle with the radio until she got Ronan Collins. I was fidgety and hot and sighing those deep sighs you make when you are highly frustrated. We were held up for forty minutes, to which she said ‘it could have been an hour’, but I felt I had put over another slice of my purgatory.

The last queue which I had to endure involved the local doctor, David.

The ‘Movember’ awareness of men’s health prompted me to go for the check-up. I wasn’t sick, as other poor cratures in the waiting room were. But I found the waiting frustrating. There was no cure, I had nothing to give out about, because a nicer middle-aged doctor you wouldn’t fine the length of the country.

Herself warned me I could be about an hour, so ‘bring a book, and don’t be annoying yourself’. Which I did, and as usual, she was right. And I got superb advice, and went home happy.

But I still hate queues. Or maybe it’s the waiting I hate, feeling I could be doing good and useful things instead of hanging about. I have a strategy now, thanks to herself: a relaxation tape in the car, a book in the waiting room. Purgatory still!