Gemma Grant continues her series on the Castles of Ireland 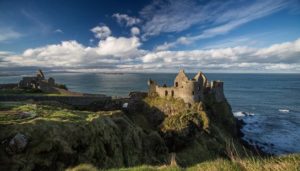 Perched majestically some 120 feet above sea level, the remains of the once spectacular Dunluce Castle, looks out, unyielding, over the wild Atlantic ocean. Beneath the castle, the cliff gives way to an impressive Mermaids’ cave.
The singing sirens of legend we are told, imprisoned a lone sailor in their watery domain, deep beneath the castle. The castle was originally connected to the mainland by a drawbridge, today replaced with a stone archway and timber bridge.

Dún Libhse meaning, according to one translation, the ‘strong fort’, had once been the lavish home of Randal MacDonnell and his wife Catherine. The castle, in its day, was bedecked with crystal glass mirrors, Persian carpets and all the finery the 1600s could produce.

Like every Irish castle, Dunluce has its own story to tell. One historical source credits Richard de Burgh (Burke) of possibly starting the building of Dunluce castle in c.1300. However, the names that give weight to the history of Dunluce are the MacQuillan and MacDonnell clans.

The MacQuillan clan of North Antrim were at one time the ruling clan who renamed the area, the Route, or ‘rout’ meaning a private army. They were eventually replaced by the more powerful MacDonnell clan from the Scottish highlands. 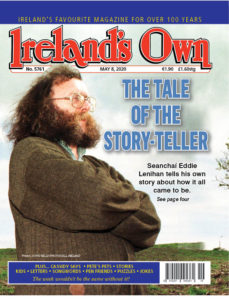 When Evelyn MacQuillan married Colla MacDonnell, the castle formed part of her dowry. When Colla died in 1558, his younger brother Sorley Boy MacDonnell was given possession of the castle by his brother James.
Sorley, of the ‘yellow hair’, sixth and youngest son of Alexander, was a serious thorn in the side of not only Elizabethan England, but clans MacQuillan and the more powerful O’Neill.

With the help of Scottish troops, the MacDonnells brought about the subjugation of the MacQuillan clan. Concerned that an influx of Scottish fighting men into Ulster could prove a worrying development for the Crown, many abortive attempts were made by the Irish government to expel the Hebridean Scots.

On one occasion, Sorley Boy was imprisoned in Dublin castle but released after a year in 1552, due to a prisoner exchange, courtesy of his brother James. Shortly after Sorley’s release, he took prisoner the constable of Carrickfergus castle, Walter Floody, and released him following the payment of a heavy ransom.