Gemma Grant continues her series on Castles of Ireland

Visitors to Malahide are promised a picturesque seaside village and designated heritage town. Complete with restaurants, fine cuisine and lively pubs, Malahide prides itself on being the gourmet capital of the East Coast. Off set with a stunning sandy beach, a haven for water sports, the area offers another treasure, Castle Malahide. Located ten minutes drive from Dublin airport and twenty-five minutes from the city centre, the castle offers free parking and a rich history of the Talbot family, whose lineage goes back some eight-hundred years, to Ireland’s troubled past. 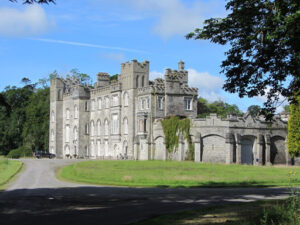 The first of the de Talbot family to arrive in Ireland during the Norman conquest of the 1170s was Richard de Talbot, progenitor of the line in Ireland. He was given the lordship, lands and harbour of Malahide during the reign of Henry ll. The castle would remain in the hands of the family for centuries. The original castle started out in life as a motte-and-bailey. It re-emerged, some three-hundred years later, in its present location, as a more permanent stone edifice with various additions added over time.

The castle and family were not immune to the political vagaries of Ireland’s changing fortunes. During the Catholic Confederacy Wars of the 1640s, Malahide castle, under the lordship of John Talbot, came under the spotlight of the Duke of Ormond, James FitzThomas Butler, who garrisoned the castle with some 200 men.

Although John Talbot was loyal to the Crown, other family members were not and in 1642, he was indicted for treason and his estates forfeited. He managed to rent them back, but following the successful Cromwellian plantation, some ten years later, John Talbot was given the choice, ‘to hell or Connaught’.

The castle saw a new resident, Myles Corbet, Commissioner of Affairs in Ireland. Corbet had been one of the signatories to the death warrant of King Charles I and was rewarded by Oliver Cromwell, with, among other things, residency of castle Malahide.