PAULA REDMOND profiles the man who was a celebrated survivor of the 1916 Rising, a crucial figure in the post-Rising reorganisation of the Irish Volunteers and Sinn Féin; speaker at the first sitting of Dáil Éireann; a passionate and acerbic opponent of the Anglo-Irish Treaty of 1921; a reluctant participant in the Irish civil war, having tried to prevent it and that conflict’s first high profile fatality.

Irish Republican and first president of Dáil Éireann, Cathal Brugha died on July 7th, 1922, from a gunshot wound sustained during the Civil War. Brugha was an avid nationalist and fought in both the Easter Rising and the War of Independence.

Brugha was born Charles William St. John Burgess to a father of Protestant ancestry, Thomas Burgess and Catholic mother, Maryanne Flynn, in Dublin in 1874. Thomas worked as an art dealer and cabinet maker to support his large family of fourteen children – Brugha was the tenth child and was raised Catholic.

Brugha entered Belvedere College in 1888. A talented athlete, he was involved in boxing, rugby, cricket, cycling, swimming and gymnastics amongst others. He was a teetotaller and non-smoker – he was also averse to swearing.
He planned to study medicine but when his father’s business failed he took up employment initially as a clerk, and then as a travelling sales representative for Hayes and Finch, a church supplies company. 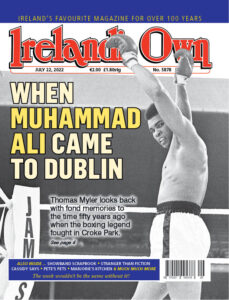 He joined the Gaelic League in 1899, became fluent in Irish and changed his name from Charles Burgess to Cathal Brugha. In 1908 he was elected as president of the Keating Branch of the League – holding the title until his death. In the same year he joined the Irish Republican Brotherhood (IRB).

In 1909, he set up a church candle- making business with brothers Vincent and Anthony Lalor and worked as salesman for the company. Incidentally, it is believed that Michael Collins once escaped arrest by posing as a candle maker while the Black and Tans searched Lalor’s factory.

Brugha met his future wife Kathleen Kingston at an Irish League event in Co. Offaly. The couple married in 1912 and went on to have six children. The military nationalist organisation the Irish Volunteers was founded in November 1913 and Brugha joined at the inaugural meeting. He progressed from first lieutenant to battalion adjutant of C company, 4th Dublin, in 1914.

Later that year he headed up the advance column of Volunteers who landed arms at Howth. He was also present for the arrival of a small number of arms in Wexford a few days later.