Cats have featured in various books, comics, films and television down through the years. Francis K. Beirne takes a look at some of the best-known fictional felines.

Fictional cats have been popular in literature for hundreds of years, with the folk tale of Dick Whittington and his cat being one of the oldest. The tale is based on the life of Richard Whittington, a wealthy merchant who later became Lord Mayor of London.

In the story, young Dick walked from a country village to London where he hoped to make his fortune as he had heard that the city streets were paved with gold. When he reached the big city Dick could see horses, carriages, hundreds of people and great buildings – but nowhere could he see gold.

After a few days, he was so hungry that he collapsed in a heap on the doorstep of a rich merchant’s house. Though the kind merchant took him in, Dick was sad because the tiny room he had to sleep in was full of rats and mice.
He was so desperate that he saved up all his pennies and bought a very special cat. She was the best cat in all of London at catching mice and rats. After a few weeks, Dick’s life was much easier because of his clever cat who had eaten all of the rats and mice and he was able to sleep in peace. 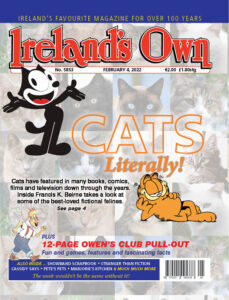 Since the pre-Victorian era, the story has been a favourite subject of pantomime, especially during Christmas season.
In Lewis Carroll’s Alice’s Adventures in Wonderland (1865), the Cheshire Cat belongs to the Duchess. Alice first meets it when she leaves the Duchess’ house and finds it in a tree.

It constantly grins and can disappear and reappear whenever it likes. Sometimes it disappears and leaves its grin behind. Later she meets it again in the Queen’s croquet garden. Alice notices that the cat has ‘lovely green eyes’.
The Cheshire Cat is the only character in Alice in Wonderland who actually listens to Alice. With his remarks, he teaches Alice the ‘rules’ of Wonderland. He gives her insight in ‘how things work down there’.

The Cheshire Cat is sometimes interpreted as a guiding spirit for Alice, as it is he who directs her toward the March Hare’s house and the Mad Tea Party, which eventually leads her to her final destination, the garden.