Charlton Heston was an American actor and political activist. As a Hollywood star, he appeared in 100 films over the course of 60 years, writes Anthony Costelloe

He parted the Red Sea, humbled the arrogant pharaoh, Ramses II, who, burying his head in his hands resignedly exclaimed, – “His God, is God.” Illinois-born Charlton Heston, whose real name was John Charles Carter, gave a powerful performance as Moses, God’s law giver in Cecil B. DeMille’s magnificent Biblical epic, ‘The Ten Commandments’ (1956).

Heston got top-billing in this visually stunning movie which has a running time of three hours and forty minutes. It features a host of Hollywood stars. Yul Brenner as Rameses II, Anne Baxter as Nefretiri, Sir Cedric Hardwick as Rameses I, John Derek as Joshua, Edward G. Robinson as Dathan and Vincent Price as Baka the master builder, together with a cast of thousands. 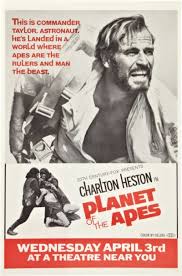 Heston was thirty-three years old when he starred as Moses. His baby son, Fraser, was cast as the baby Moses set adrift in a basket on the river Nile. Heston starred in over one hundred movies in a career spanning six decades, making his acting debut in a film, ‘Peer Gent’ (1941).

Two other movies followed, then he was hired by the renowned Hollywood director, Cecil B. DeMille to star as the hard-working circus boss, Brad Braden in the 1952 Academy Award winning circus movie, ‘The Greatest Show on Earth’. Heston took second billing to Betty Hutton in this epic circus extravaganza.

In the ‘Ten Commandments’ trailer DeMille comments on Heston’s facial features, especially his nose, and their striking resemblance to Michelangelo’s marble statue of Moses which can still be seen in the Vatican at Rome.

Heston once said in an interview, “If you can’t make a career out of two DeMille pictures you’re in the wrong business.”

Chuck Heston actually met DeMille a third time when the director was supervising the action adventure movie, ‘The Buccaneer’ 1958. This film, based on the defence of New Orleans by General Andrew Jackson against the British in 1812, starred Yul Brynner in the lead role as the pirate, Jean Lafitte. This technicolour movie was directed by DeMille’s son-in-law, actor Anthony Quinn, whose immigrant father was from County Cork. Heston had a ‘cameo role’ as General Andrew Jackson.

Charlton Heston was the only Hollywood actor to get top-billing in three epic movies. He mounted the podium at the Academy Awards ceremony in 1960 to receive a well-deserved Oscar for best actor as Judah Ben Hur in the greatest biblical movie ever filmed – ‘Ben Hur’ (1959). He took top-billing in this his second epic venture.
This three-and-a-half-hour M.G.M awe-inspiring spectacle featured one hundred thousand costumes, eight thousand extras and three hundred sets. It was allocated the largest budget in cinema history. The movie won eleven academy awards and was directed by the world’s greatest director, William Wyler.

The chariot race sequence had a running time of twenty minutes. The actors had to spend many weeks training how to drive and control the heavy four horse drawn chariots. The cameras expertly capture the speed and skill of the charioteers as they frantically race around the spina (centre) of the arena.

The fierce contest between Judah and his sworn enemy Messala (Stephen Boyd), who was once his friend, is skillfully cinematically depicted. Messala takes a mortal fall and his mangled body is speedily removed from the arena. Messala’s death scene is riveting as he agonisingly splutters his words of hatred to Judah.

The final scenes show Christ being led along the Via Dolorosa to be crucified. Judah sees the bleeding body of Jesus and the hatred for Messala leaves him. Both Judah’s mother and sister are miraculously cured of leprosy. 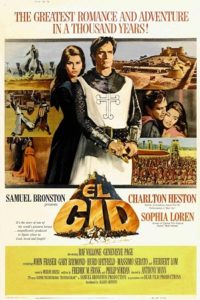 In 1961, Heston took top-billing in his third epic, the historical movie depicting the life of Don Rodrigo Díaz de Vivar – ‘El Cid’ from the Arabic language meaning – ‘the Lord’. This three-hour film was directed by Anthony Mann and produced by Samuel Bronston. The enchanting music score was by the celebrated composer, Dr. Miklós Rózsa. The box office takings were thirty million dollars.

The real Rodrigo Díaz died in Valencia in 1099 A.D. There are many memorable scenes in this stunning epic. Not alone does Rodrigo show physical courage, Heston expertly wields his broadsword many times in defence of honour and king but moral courage is also evident when he stands alone as the crowd kneel in fealty to Alfonso (John Fraser).

He approaches the throne and the camera hones in on Rodrigo’s hand pressing Alfonso’s hand on the Bible and forcing the newly crowned king to swear that he was not an accomplice in his brother Sancho’s (Gary Redmond) death. The king banishes Rodrigo for humiliating him in public.

Then there is the tender love scene when Doña Ximena (Sophia Loren) realizing the purity of heart and mind of the man she recently hated rejoins him in banishment. Their love is rekindled on a lonely hillside.

Bronston employed over seven thousand extras for the final battle scenes depicting Ben Yusuf (Herbert Lom) and his army and war engines approaching Valencia. The camera captures a shower of arrows ripping the sky. El Cid is pierced by one.

Rodrigo is warned that if the arrow is not immediately extracted he will surely die. Again, he shows moral courage as he instructs his beloved Ximena to leave the arrow in place. The final battle can only be won if his soldiers see their Cid leading the attack the following morning. Ximena painfully honours his request.

The dead Cid is placed on his steed, flanked by King Alfonso and his loyal Moorish friend, Mu’tamin (Douglas Wilmer).

As Valencia’s gates open, a ray of light envelopes the Cid. The enemy panic. Ben Yusuf is trampled under the Cid’s horse. The final scene shows the noblest knight of all galloping on his steed along the shore into eternity. Most of the scenes were shot on location in Spain, a few interior scenes were shot in Rome.

This 6’3” iconic star had a powerful screen presence. His facial structure registered authority and high seriousness. He refused to star in movies that did not extol values such as moral and physical courage, loyalty and responsibility. Many of his personae were men who made an indelible mark on humanity, John the Baptist, Michelangelo, General ‘Chinese’ Gordon and President Andrew Jackson.

He was eighty years old when he retired from acting. He wrote an auto-biography, ‘In the Arena’ and made a guest appearance on Gay Byrne’s ‘Late, Late Show’ on the eve of its promotion in Eason’s in Dublin. He obviously had “a bankable nose” as he himself stated because when he passed away on April 5th, 2008, his estate was worth forty million dollars. He had been suffering from Alzheimer’s disease for five years. He died of pneumonia.

He had been married to Lydia Clarke for sixty-four years until his death. His epic movies and indeed his portrayal of real-life moral men will be etched in the memory of movie-goers forever.