The birth of a little Baby at Christmas makes changelings of us all. Yet, at the same time leaves familiar things the same. The New Light has dawned in the world, allowing us to see ourselves in a new light and, through our changeling state, glimpse the better people we could be, writes Tom McParland.

The Irish belief in fairies – Christmas or secular ones – predates Christianity and still exists today.

If faith can moves mountains, Irish fairies can move motorways. Hence the 1999 re-routing of a Clare bypass to accommodate a fairy sceach (thorn bush). Or the warning by Kerry TD, Danny Healy-Rae that the reappearance of a dip in the recently repaired N22 tarmac was the work of fairies. Our Irish attitude towards fairies and Christmas is pragmatic. Like Voltaire’s deathbed response when asked to renounce the devil: “This is no time to be making new enemies.”

So our respect for Christmas and secular fairies is exemplified by the fairy at the top of the tree. It can be interchangeable with an angel or a star, uniting two beliefs. And since Yuletide trees, fairies and holly were rooted in old pagan practices (holly supposedly where fairies slept), why part company with old friends? After all, isn’t ecumenism another true spirit of Christmas? 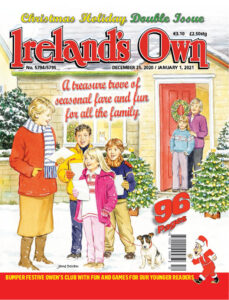 There’s an additional part of our material world making itself detectable via particle physics – the study of atom and molecule movement. These movements are subject to Heisenberg’s uncertainty principle: i.e. that when the exact position of a particle is determined, another position is imprecise. So Irish belief in fairies no longer seems fanciful.
In ancient Ireland the healthiest child could be suddenly taken, or the kindest soul suffer undeserved misfortune. Ditto for pretty young women or handsome and able-bodied men. Young brides and new mothers were particularly vulnerable. The feeble elderly, monitoring their every real or imagined ache or pain, trembled if the indifferent banshee (grave hag) wailed.

The natural assumption was that such chaos was the work of malevolent Irish fairies whose world had unintentionally been disturbed, the way an unwitting footprint can devastate the insect world. The disabled new-born or the suddenly sick child was believed to be a changeling – a substitute for the normal child who’d been stolen by fairies because of some unspecified offence.