Christmas in Ireland in 1916

In the aftermath of The Easter Rising, Christmas of that year had a rather low profile. This year, Irish people at home and abroad celebrated the anniversary of the Rising with great pomp and dignity whether they supported or opposed it. Though times were not be so good economically certainly Christmas 1916 (a Monday) was a season of great trepidation and little joy. It was in the middle of the First World War and more than one million soldiers had died in the epic battles of the Western Front, including many Irish. 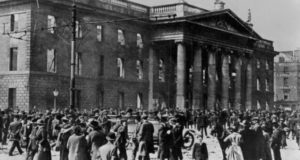 This was probably the most joyless Christmas of the war. The events of the war and its extended nature cast a pall across the country and was sure to be morose and hard to build up a season of joy. Christmas 1916 was beset with food shortages, bad news from the WW1 front, and the worst weather for over 30 years.

In the eight months since the Rising, efforts were made, particularly in Dublin, to rebuild the carnage and have some normality for the festive season. Cinemas and theatres were reopened and the Gaiety put on ‘Humpty Dumpty’. Once the bigger stores were ready to reopen, in a limited capacity, they were not shy to insert large advertisements in the papers.

While the selection of gifts and goodies was fairly widespread, sales were slow, but gifts were ordered early by post and many goods and toys looted during the trouble made a reappearance, at knock down prices of course. Roberts and Prices seemed to be the large postal stores.