From our Christmas Annual – Christmas in Ireland in 1922

The editor noticed an adundance of holly and ivy at Moore Street market, a lady stall-holder confiding in him that she wanted to see an end to ‘all them ambushes’.

Six months after the signing of the Anglo-Irish Treaty, pro and anti-Treaty sides in Ireland engaged in a bloody civil war, which would last until May 1923. In consequence, Christmas 1922 was grey and bleak in Dublin, Cork and Belfast, the half-lit streets echoing to the sounds of sporadic gunfire, bomb blasts, and the clanging bells of partially-functioning fire engines.

Quoting lines from Fr. Dan Casey’s An Irish Christmas Legend, the Drogheda Independent longed to see the day when peace would return, when the Advent candle would flicker once more in the windows of Irish homes: ‘A welcome waits the Holy Child where Christmas lights bright glow’. 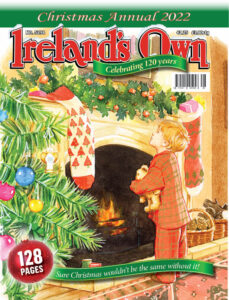 On the 1st of December, just five days before the Irish Free State was officially established, the Weekly Freeman’s Journal offered the hard-pressed citizens of Dublin a free 1923 Almanac, expressing hopes of peace and prosperity for the coming year.

Measuring 22×17 inches, the publication included photographs of William T. Cosgrave, president of the Executive Council of the Irish Free State, and Richard Mulcahy, Commander-in-Chief – the eagerly-awaited Almanac sold out by noon, making way for a hastily published afternoon edition.

Reminding Dubliners that the price of the newspaper and Almanac together was fourpence, the editor advised them not to pay sixpence, the price demanded by some impish newsboys at Westland Row station.
Though the Civil War deprived sports fans of watching their local teams play hurling and football, the mid-Tipperary GAA determined that fixtures would resume as soon as possible.

Meeting on the 3rd of December at the Foresters’ Hall, Thurles, committee members lamented the fact that games had to be postponed during the last six months because of the ‘disturbances’, and when one member timidly suggested that Holy Cross hurlers should play Rossmore on the last Sunday of December (New Year’s Eve), the following exchange summoned howls of laughter:

Mr. Carew: Sunday after Christmas? What are you talking about? The Christmas whiskey would not then be demolished, and they’d all be drunk.
Mr. Campbell: And kill themselves probably with the sticks.