From the comfort of his armchair, Francie took another glance through the sitting room window and noted the sky was blackening. The radio hummed out a Christmas song, the one by Dan Fogelberg with the name that he could never remember, and his mother dozed contentedly in the chair opposite him.

Flakes of snow were beginning to parachute from the heavens, crashing unapologetically on to the ground that had been hardening for hours. He thought about the whiskey bottle in the press, and purred at the thought of a Christmas Eve tipple. But it was too early for a drink, especially when he had several visits left to make. 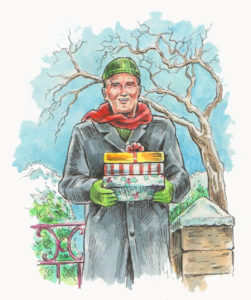 Every Christmas Eve, Francie made three visits. His first port of call was his late father’s sister, Bridie, followed by his old landlady, Agnes, and lastly, Bob, who had been his kind-hearted boss when he used to work in the local fish factory. All three were very elderly now, and living alone.

Francie had made a point of visiting them each year as a thank you for being good to him when he was younger, when they had been in good health.

This year though, he was starting to tire more easily, and the thoughts of the visits weighed more heavily than before. “Would they even notice if I didn’t call?” he murmured, and picked up the TV guide to see if there were any festive films scheduled for that evening.

He had passed the half century-mark on his last birthday, and his ageing body was starting to slow down. Emotionally, this year had been the toughest he could remember. Lisa had finally left him, after years of threatening to, and it cut like a knife to hear from his friends she had quickly found a new partner.

“Still, it’s probably for the best,” he grumbled as he heaved himself from the chair, “she never would have been happy here anyhow.”

With a heavy heart, he parked his thoughts of a glass of whiskey for later, fixed the blanket over his sleeping mother’s knees, and dressed himself for the cold outside. He turned down the radio, and tossed another couple of briquettes on the fire. “That’ll keep you warm till I get back, Mam,” he whispered.

He picked up three boxes of wrapped biscuits that were stacked under the tree, turned the lock in the door, and made his way out into the snow.