During Christmas past in Ireland before tv drama serials were called soap operas, they each had their own Christmas screen stories. It was black and white throughout the 1960s and into the early 1970s before colour television showed Christmas lights, trees, tinsel and turkeys being brought into houses in preparation for the big day.
The two big serials on Irish television in the 1960s were The Riordans and Tolka Row and both were family orientated programmes.

They had their cosy Christmas episodes featuring families going to midnight or Christmas Day Masses and sitting around the table for Christmas turkey and pudding etc.,

The two Irish soap operas had each one half-hour weekly episodes, which is something that wouldn’t be tolerated in today’s instant streaming television world, where a soap has to have at least have four half-hour episodes per week, like RTE’s Fair City. 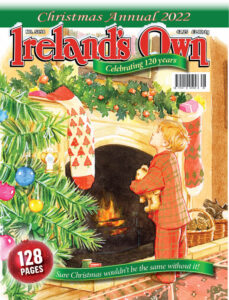 Tolka Row was first and premiered on January 3rd, 1964, which was still technically Christmas.
In its first Christmas episode in December 1964, the popular Nolan family on the series were preparing for the season, and according to the Irish Independent at the time, “a ghost was taking up residence with the Moores”. It also reported that the character, Mrs. Feeney, was taking ‘umbrage’ with the situation.

The Christmas Eve 1965 episode promised a Christmas full of surprises for the Feeney and Nolan families, but ‘a sudden shock’ was to come for them on St. Stephen’s Day.

The Irish population was also preparing for Christmas 1965, when the well-liked RTE radio drama series (soap opera) The Kennedys of Castleross was cancelled, due to the pulling out of its sponsor, Fry-Cadbury. However there was an outcry from listeners, and RTE gave in, and continued on with the series, until it was eventually cancelled in 1973.
At Christmas, 1966, on Tolka Row, Statia Nolan was reported to ‘woo’ Mr. Hegarty which led to ‘unforeseen results’.
During Christmas, 1967, the traditional greetings seemed ‘ironic to Rita Nolans and the Doyles’ in the circumstances of their lives.

Tolka Row was cancelled in 1968, but The Riordans had a much longer run – fifteen years!
The half-hour series always showed the traditional rural Christmases of 1960s and 70s.
An interesting looking plot occurred at Christmas 1966, when a ghost was reported to appear at Kilfedder Hall in the Christmas night tv episode.

The RTE ratings for Christmas 1968 had The Riordans and Gay Byrne’s Late Late Show as the most popular television programmes for the season.

In the later seasons, The Riordans went to one-hour episodes, including at Christmas 1977.
However, the following Christmas (1978) brought bad news for tv viewers across Ireland, when on December 19th, it was announced that the series was been cancelled. There was shock everywhere because The Riordans was still pulling in high ratings.