In 1967 a controversial film entitled Guess Who’s Coming to Dinner was released. The film dealt with the sensitive subject of a positive representation of the inter-racial marriage in America. Historically it had been illegal in most states of the United States for inter-marriage. In fact, it was still illegal in 17 states, mostly Southern states, until June 1967, six months before the film was released. 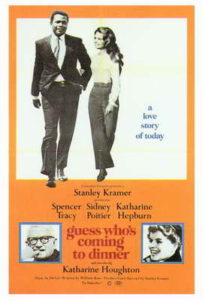 The film was produced and directed by leading film maker Stanley Kramer for Columbia Films on a budget of $4 million. Kramer and screenwriter William Rose completed the script in the remarkably short period of five weeks.

The film was intentionally structured to debunk ethnic stereotypes and took chances. The young black doctor was purposely created perfect and likeable, so that the only possible objection to his marriage was his race.

The film was billed in 1967 as Hollywood’s first serious film about interracial marriage and was resented by many.

Continue reading in this week’s Ireland’s Own (issue 5613)