Following the release of his film Kiss Me, Stupid in 1964, director Billy Wilder was deeply hurt by the vicious critical response to both him personally and the film. The press regarded it as being sordid rather than satirical. Critics and the Catholic Legion of Decency had a field day over this shameless sex comedy that misfired and were critical in both print and word. 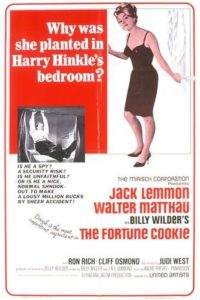 These people must have forgotten his classics films that included such hits as The Seven Year Itch, The Apartment and Irma La Douce. The Hollywood attitude was that you were only as good as your last film.

Wilder spent a year in Europe contemplating his future. There was surprise when he returned Stateside to undertake another project. Wilder was unrepentant and in 1965 he embarked upon another savage assault on American morality with The Fortune Cookie.

The idea for The Fortune Cookie came from a real life experience when Wilder saw a player run into a cameraman on the side lines while watching a football game.
Jack Lemmon was the first member of the cast to be signed for the starring role of Harry Hinkle. Originally Wilder had considered two actors, Frank Sinatra and Jackie Gleason, for the support role of Willie Gingrich before he settled on Walter Matthau.

Continue reading in this week’s Ireland’s Own (issue 5602)