A view of family life in the American wild west of the 1870s was what family audiences in the 1970s got when tuning into the weekly television series, ‘Little House on the Prairie’.
Based on a series of books written by Laura Ingalls Wilder, the series was immensely popular in America and all over the world, not just during its nine year run up to 1983, but up to the present day in its reruns.

It told the story of farmer Charles Ingalls and his wife Caroline, and their three daughters, Mary, Laura and Carrie. As the years went on baby Grace joined the Ingalls family and they also adopted Albert. 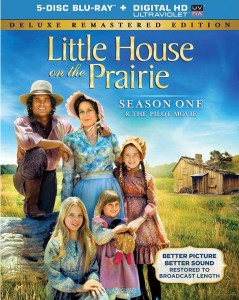 The star of the show was originally Michael Landon, as Charles Ingalls.  Landon had previously acted in the 14 year run of the western series, ‘Bonanza’.  He was also the Executive Producer of ‘Little House’, and he directed and wrote many of the episodes.
The series was set in the fictitious small town of Walnut Grove in Minnesota, USA. The Ingalls children went to the local school, where they were taught by Miss Beadle, and later by Miss Wilder. Oleson’s General Store in the town was run by Nels Oleson (Richard Bull) and his snobby wife, ‘Harriet’ (Katherine McGregor). The Ingalls family also had local friends like Jonathan Garvey (Merlin Olson) and his wife Alice (Hersha Parady) and their son, Andrew (Patrick Labyorteux).

‘Little House’ was nominated for many awards and won some for music and cinematography. The idea for the series came from producer Ed Friendly, who saw his daughter reading a ‘Little House on the Prairie’ novel.  He was inspired by the power of the story of the frontier family.

Michael Landon was also interested in the idea, and saw it as a family values show. Friendly wanted the series to follow the storyline of the books, but Landon went along with the ideas of the hit series changing the storylines as they went along, for example bringing in an adopted son, Albert (Matthew Labyorteaux) to the family.
500 girls auditioned for the role of Laura, but Michael chose nine-years-old Melissa Gilbert, who grew up before the viewer’s eyes during the years that the hit series was on the air.

Melissa and the other young cast members could only spend eight hours on the set.Four of those hours were spent at tuition and one hour was for recreation. Therefore they could only be allowed to act for filming for just three hours.

‘Little House on the Prairie’ was a Top 30 show throughout its nine year run. Its highest year was in 1977, when it reached No. 7, and beat ‘The Waltons’ in the ratings for the first time.

In Ireland, ‘Little House’ had a teatime audience and it was considered as a companion series to ‘The Waltons’, which of course it wasn’t, because they were filmed by rival companies, and in the USA were shown on rival networks.  ‘The Waltons’ was set in the 1930s depression era,and to WW2.

‘Little House on the Prairie’ was undoubtedly one of the most popular family drama series of the late 1970s.   Melissa Gilbert, despite her young age, became the star of the show, and many of the episodes were built around her, from the time she was a young girl in pigtails, up to the time when she married and had a baby daughter.

Her rivalry with Nellie Olson (Alison Arngrim) was legendary, and was seen as a kind of good and evil joined in with rich and poor.  However in real-life, Melissa and Alison were close friends.

As the years went by, the series continued its popularity but Michael Landon and the rest of the cast were interested on taking on new projects.  Landon wrote and directed the drama series, ‘Father Murphy’, which starred Little House stalwart, Merlin Olson, and his huge workload led Michael to leave ‘Little House on the Prairie’ at the end of the 1981/82 season.

For the 1982/83 season the series was repackaged as ‘Little House: A New Beginning’.  Charles and Caroline had left the little house in Walnut Grove, and a new family took over their farm. Laura and her husband, Almanzo (played by Dean Butler) were the main characters and the storylines were mostly built around them.

Ratings continued to be high and for that season Little House was still inside the Top 30. However Michael Landon wanted to finish up ‘Little House’ and he wrapped up the series with three television movies.

The series is still shown on satellite television today where it continues to bring memories to parents and grandchildren about a time watching television in their childhood.